I had training in Christchurch today for work so arranged to pop up on Sunday for a game of KoW vs Mark. I've been in contact with Mark a bit of late but had not met or played him before. I'd not been down to the CHCH wargaming club in a few years but caught up with a few old gaming friends and was great to see so many different games being played on a Sunday afternoon.

Scenario is Plunder with five objectives down the centreline. The middle and right objectives form my armies point of view were worth two points so they were on the ones I was aiming for.

Mark has already posted a great battle report of our game yesterday. Mark's report is here.

I wanted the far right objective, the two hills meant good terrain for my knights so ended up massing my three regiments there, on my left flank I hid my giant and ogre behind a wood, hoping to deal with a cannon or two with my scouts and then release the giant and ogre to attack the flank. I really wanted to get rid of those cannon as quickly as I could.

In the centre I wanted to simply stay put and let the knights on the right try to sweep round the flank- nobody told the footguard commander (it would have been bad for morale) but their role was simply to refuse my centre and let them be target practice for the dwarven crossbows.

I had mobility to my advantage but Gordon has taught me to be wary or rangers and their annoying crossbows, while the infantry regiments and hordes would be hard ot shift too. Another difference being Mark include lots of throwing dogs (dwarven pilum) with his regiments. 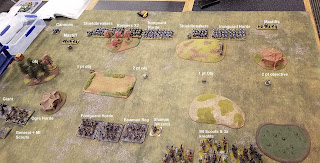 I really like Mark's heraldry on his dwarves shields, simple but striking. 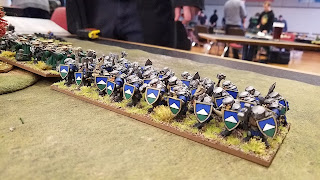 Turn 1 not much from the Easterlings, just probing forward on the left flank with the scouts and ogre. 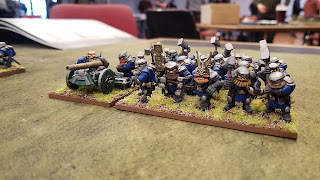 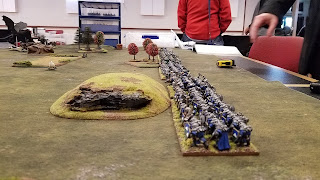 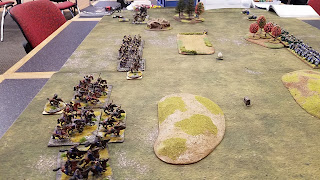 I got lucky on turn 1 the two dwarf cannons that had targets both missed. 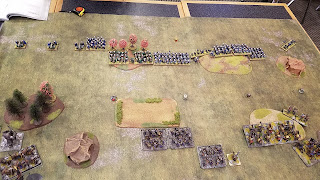 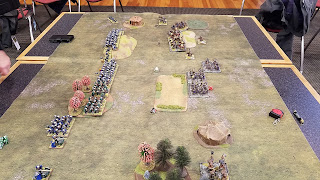 Turn 3 (I think), my general on a giant flying chicken had just been blown to smithereens but the mounted scouts charged homeand routed the first cannon. 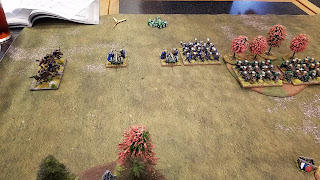 The mastiffs look for scouts to attack. 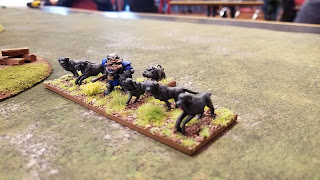 Mark focuses his fire on the left most knight regiment, leaving the other two intact- three regiments of knights are (IMO) better than 2! 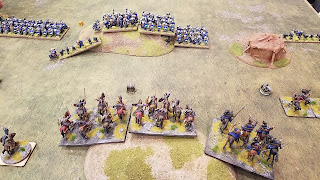 The scouts having dispatched one cannon line up another one. 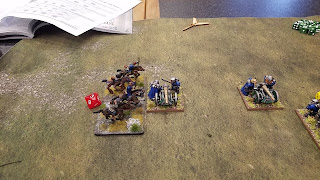 The knights have taken 7 wounds but remain in the fight...for now. 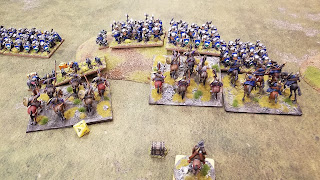 In the centre the footguard have taken 8 wounds from the rangers and dwarven heroes but shrug them off. 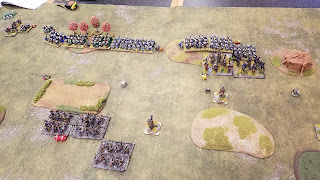 Two units of knights slam into the shieldbreakers and Ironguard. 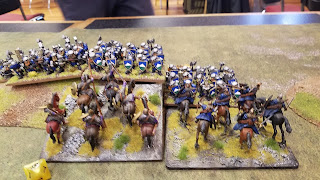 The dwarf centre prepares to advance towards the objectives. 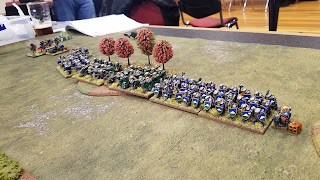 The Ironbreaker horde had been destroyed for the loss of a regiment of knights. 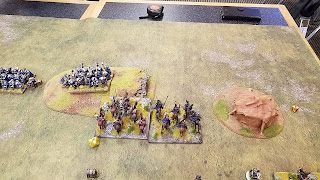 On the left the giant and mounted scouts have dealt with the last cannon and the ogres (well Reaper Bones D&D bugbears actually) are in charge range of the shieldbreakers. 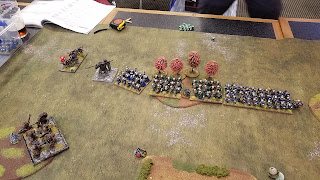 On the right the other shield breakers prepare to see off the knights. I am reasonably happy with the way things are looking. I now need to keep the dwarves away from that far right objective. 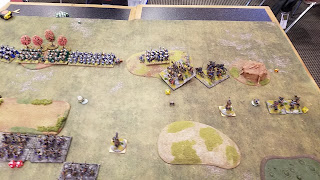 A shot along the battleline. 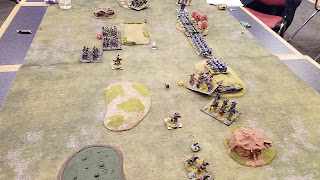 In the centre the footguard watch as the dwarves advance towards the other 2 point objective. 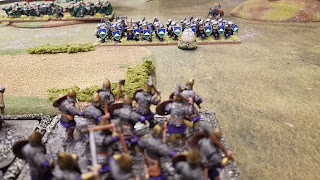 23 wounds= one dead footguard horde. The rangers have done the damage here. 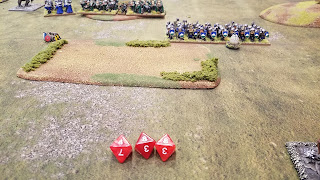 I've managed to turn both flanks. 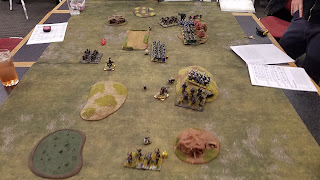 The dwarf general and Bannick Kolearm (I think) trade ineffective blows against each other (1 wound each). 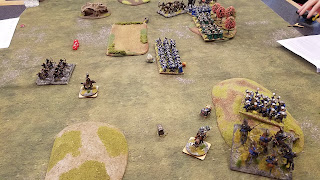 The ogres, giant and scouts gang up on the shieldbreakers 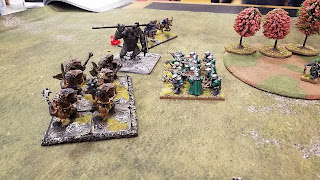 Having destroyed the Shieldbreakers the giants and ogres look for another target. 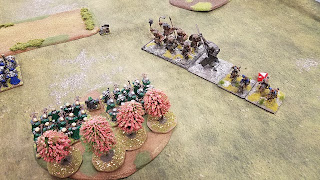 Mark used his charactrer to destroy the scouts and protect the rangers flank. 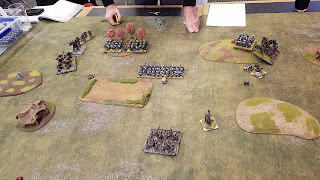 On the right the other shieldbreaker unit is ridden down. 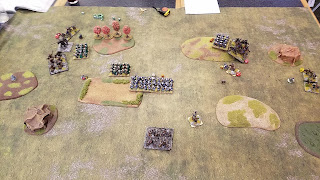 End of turn 6. We both had one objective. If we have a 7th turn I am feeling confident of claiming a 1 point objective but alas we rolled low and the game ended. 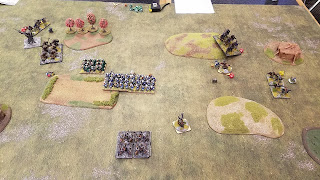 Result: 2-2 draw.
A great game which ebbed and flowed nicely and i think the draw was a fair result.  Again I was surprised with how fast the game plays. it was all done in under two hours. Mark was a great opponent and I am keen to have a rematch one day soon.
Thoughts on the army so far

I’ve had a few games now trying to tweak things and starting to get a feel of the units that work for me and, I think, starting to get the army to come together the way I want it to.

Still making plenty of mistakes with facings and forgetting to move the odd unit but feel the army is starting to gel for me a wee bit.

Mounted scouts: Really liked the charge vs warmachines and allowed me to than the flank early.
I gave Mark two targets- general on a fellbeast or couts and was  able to drive home the charge with scouts as a result. On the other flank they also did well harassing the mastiff unit and took the objective for me.

I can now also see the advantage of Mt Sergeants for the charge home. My thoughts have been scouts with missile fire to harass and break up smaller (chaff) units but Mounted sergeants are starting to look more appealing too. Finally, I like the idea of running a regiment or two of scouts but find troops great chaff units and for harassing fire

Ogres and Giant: This made a really nice 1-2 combo in this game. Add some mounted scout support they all work well together for a backup assault group. The Ogres with Def 5, 18 attacks at SC +1 are a nice little go forward unit which worked really well with the giant.

Footguard: They held their ground well and the Def 5 made them last an extra tun or two, just not sure on them, too slow compared to the rest of the army going forward. My plan is to hold the centre with them and pivot off ether flank, so not sure the footguard are the best unit for this role, given the way I want to use them not sure that footguard  is the best use of points available but is definitely provides a solid core.

Other foot options? However, I will consider Def 4 units such as spears (phalanx) or even shieldwall to save a few points- i want them minaly as a efensive unit so not sure the footgurard is the bst option. I am also considering a horde of bowmen instead for massed missile support, we will see- which would play them more like both Mark and Gordon use their Dwarven rangers.

Mounted General- I found him easier to use than “the flying chicken” and very handy as a second very inspiring re-roll. Maybe give him the boomstick for a bit of long range reach? Being on a horse means I'm not tempted to completely fly off abandoning my regiments. He is a ice little sppoort option for the knights.

The Giant War chicken of Doom (TGWCOD) aka General on a Fell beast: I see plenty of people recommending 3, personally can’t figure out 1. Need to not charge to quickly with him (or them). Two worked well but when points are tight I think one fell beast general and one mounted general gives me enough flexibility and saves points for more regiments.

However, the general got  bit unlucky this game, Mark rolling 2x 10+ nerve test rolls to send him packing but see the potential in him.

Knights: The heavy lifting component of the army. Having 3 regiments was easier to manoeuvre than 2 regiments and a horde so think it is my preferred organisation. Massing all three units together definitely paid dividends. Mark was able to badly damage one unit but it still left two full strength units to charge home- concentration of force A lesson learned!

I like the idea of a 2 up, one in reserve formation and ned to remember to mass them whenever I can.

Bow Regiment: AA handy we support unit just chipping away, not sure whether to keep it or replace with more mounted scouts for mobility, we will see. They don’t do much but are anther regiment and help chpping away at targets.