A wet, rainy day down in Oamaru today. I popped around to Gordon's for a game of Kings of War vs Josh and his goblin horde. Josh is till putting his army together so used some of  Gordon's figures to stand in for his goblin hordes.

I ran my Easterlings and think I've settled on my final list. I'd swapped the bow regiment and mounted hereo for a second giant. So i was outnumbered 3:2 in giants!

I'ds not played this one before. We each placed 3 objective markers on the opponents side of the board and there as a central one. At the end of each of your turn from turn 2 onwards you can claim the victory makers you placed on the other side of the table.

I'd not played goblins (and allies before) so was a bit unsure what to expect. I planned to try to avoid the giants and Morax units as long as possble. I'd placed two of my markers on the right hand side of the table, one on the left.

I hoped to beat the goblins on one flank or the other and use my superoir mobility ot exploit openings. I wanted my shieldwall to hold the centre as long as possible and try to win the game on the flanks. 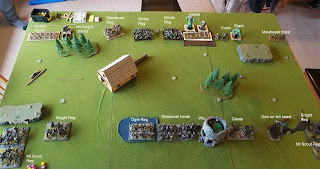 I won the roll to go first and chose not to. Josh moved his king on a chariot through the forest and the nearby mawbeast regiment ot assist. My impetuous knights decided to charged the kiing's chariot but rolled poorly and failed to destroy the king. I wasn't 100% sure on that but decided to ive it a crack, my original plan had been to hold back for the first couple of turns, so much for the plan. On the right my mounted scouts fail to wound any of the mawbeast troop. 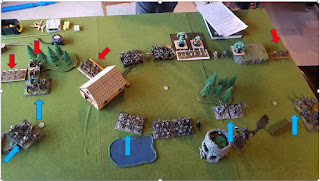 The ores glare at the Morax regiment in the distance. 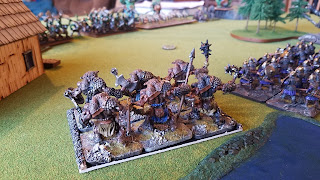 Turn 2- This doesn't look good, the knights are overwhelemed. 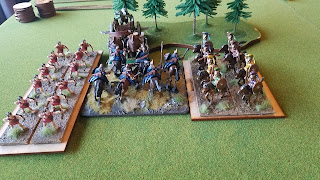 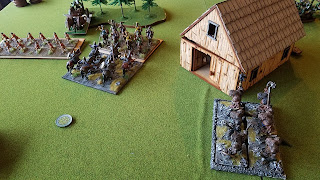 Worried that instead of winning on the left I'm goin to collapse the flank i send the ores over as reinforcements. 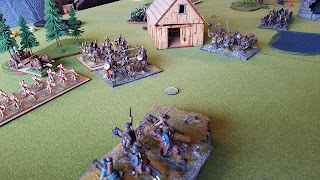 the genreal gets dreawn into combat wiuth Kulzo. My general continues his woeful record in hand to hand combat. 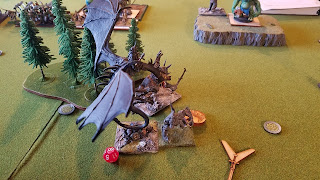 Meanwhile one of the giants charges Josh's hero with a booomstick, flattening him and lumbering into the enemy end zone. 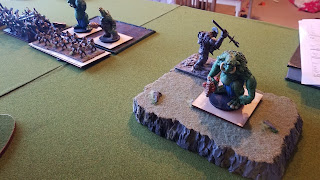 On the left the mawbeasts are wavered. The king's chariot is destroyed by bowfire from the mounted scout regiment. 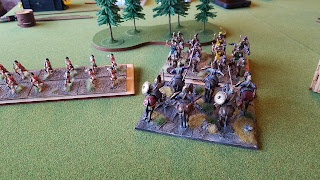 End of turn 3, the mounted scouts on right have destroyed the mawbeast troops in hand to hand combat. 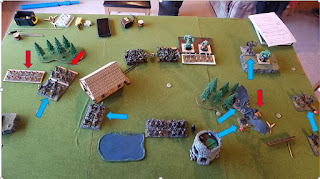 Despite the odds the knights hang in there and await assistance. 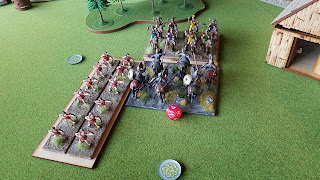 In the centre the orcs finally start advancing- my wizard has been blasting the unit on the right and has done a numbe of wounds. My eneral kills cut down by Kelzo. 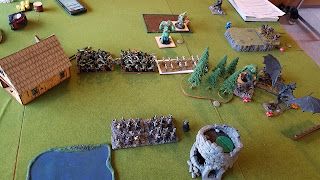 End of the turn- the ogres combined with the mounted scouts to destroy the goblins. 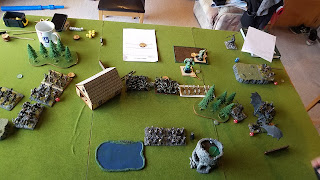 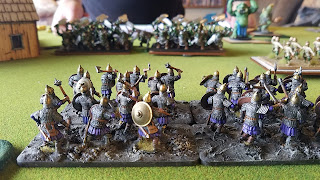 Yikes- the shieldwall was cut down to a man by two angry regmients of Morax orcs. 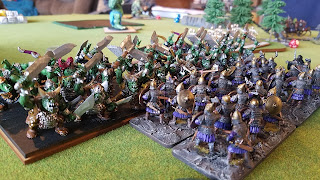 On the elft I countercharge the mawbeast reiment, adding my scouts to the melee while my wizard holds the centrre together! The wizard destorys the right most Morax regiment with his boomstick. In the top riht corner a aint and mounted scout regiment gang up on one of Josh's giants and slay it. In the midle right my kniht regiment slams into the other giant. 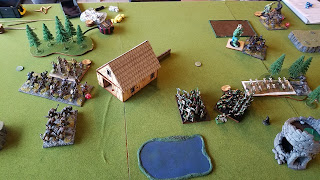 End of turn 6: Ond iant donew, one to go while the morax orcs camp on the cnetre objective. ?the score now is 3-3 but as you can see I've managed ot keep a lot more of my units alive. I want a turn 7, josh doesn't.. He rolls and we get one final turn. 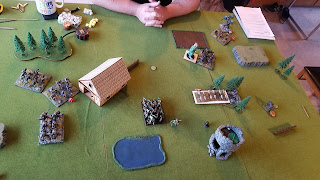 Bring it on! The last giant goes down. 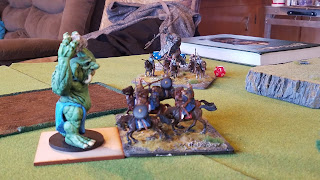 The giant destroys the oblin horde, the iant dies as do the Morax leaving a sinle model on table fo the goblins. 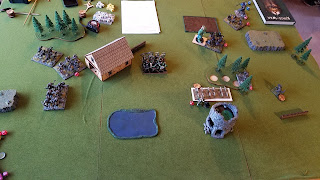 This isn't going to end well for the orcs- both mounted socut units combine wiht the ogres vs the last Morax unit., 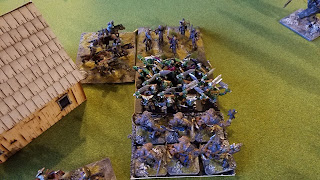 Result: 4-2 to the Easterlings.
That was a great game vs Josh. We discussed things at the end and his failure ot push his giants and orcs forward early was probably a major mistake, as was my charging my knights into the chariot on turn 1. Overall I was happy with how the army went, I'm starting to get the hang of the mobility and love the versatility of the mounted souts- they did okay in bowfre, were great support units in hand to hand and were also nice bait/chaff units to protect my knights- and definitely more than earned their keep.
How well did the mounted scouts do? They assisted in killing the bulk of Josh's army. The units circled are ones that they assisted destroying! 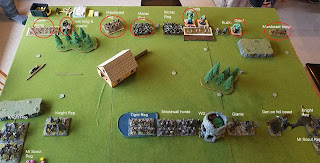 Hannibal would have been proud of the mounted scouts... as would Ghengis. Also, I thik the goblin horde may have been better off deploying in fornt of the orcs and simply charging my centre ASAP.

The extra giant was handy too and I don't regret losing the bow unit or mounted general. I'm sure there are times I will miss a second general reroll but am happy with the balance of the army, now its a matter of getting to grips with the various combinataions and maximising my mobility whenver possible. I think I managed to support most of my attacks with the mounted scouts or other units when I could.
I much prefer the shieldwall to footguard, sure they died to a man but I want them as a defensive unit and to be able to manouvre the other units off so they work well in this role. Doing something useful is an added bonus!
I look forward to a rematch my Johs soon, it was a great game which we both hand chances to win.
Craig