Another game of KoW at Gordon’s today. When I arrived Josh and Gordon were finishing a game in which the dwarves saw off the orcs and their giant allies- 3x giants!

• 1x wizard on a horse-boom stick

Note: I'm not using the mounted sergeant regiments in the photo below, I'm using 3x troops of mounted scouts instead. 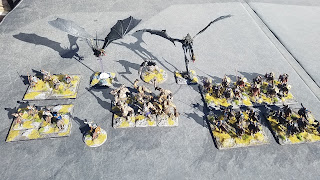 GW riders of Rohan have many uses- in this case they've gone ot the dark side and being ssued as Easterlings. 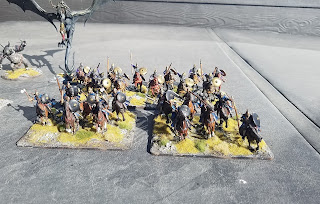 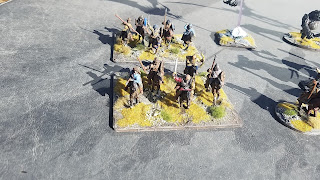 A regiment of Ogres- Reaper Bonesmini's and a couple of Reaper Ettins. 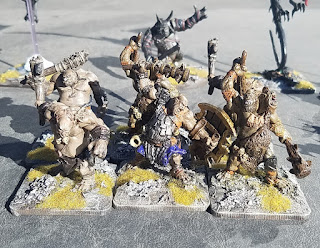 We rolled up control, where you get points at the end of the game for controlling each different of six quadrants.

My plan- try to deal with those bloody ranger troops, to my mind they were a big threat early on to my knights, and once they were dealt with then try to time my charges to maximum advantage. If I could take one or two out with my own lightning bolts and shooting then I’d be happy. Also I needed to watch out for chaff units trying to stop my knight charges- especially the horde.

The mission meant control of the six table zones so needed to also keep that in mind.

Deployment. I had decided to hide the knight horde behind the woods and move through them and wait for an oportune time ot charge, ideally after my scouts had dealt with some of those bloody annoying ranger troops.

As you can see Gordon continued with his checkerboard defence interspering his rangers with heavier hitting units, it is an effective tactic. 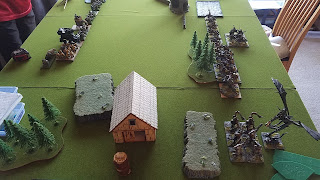 The dwarves get the first time and managed to kill one of the scout troops. Boo Boo the giant shambles forward hoping for a suitable target- if not how about a 65pt chaff unit of mastiffs?  We had a bit of a joke about giants flunking accounting school. 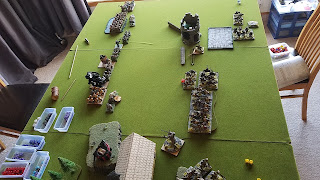 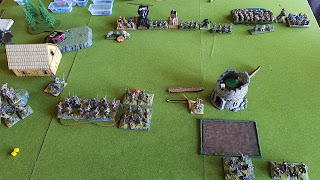 Charge! My hope was to lure the dwarves out to attack the giant and open them up to a countercharge by my knight horde. Gordon didn't fall for it though and did not coutner attack Boo Boo. 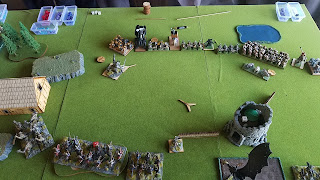 Watching the giant get stuck in one of the Easterling cavalry commanders was heard to ask: Should be advance now? Yeah, nah. 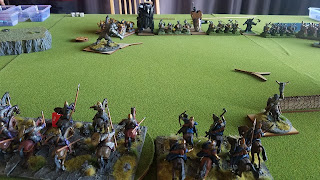 The giant squishes the mastiffs and looks for more targets. Luckily I had wavered one unit of rangers so that will be one less unit of shooting! 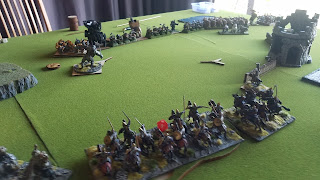 As you can see the dwarves are slowly pivoting towards the centre of the table but not attacking Boo Boo so he charged into a unit of rangers on his next turn. Go Boo Boo, go!. 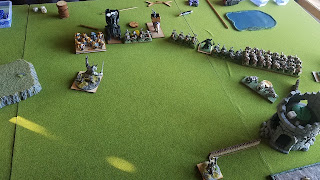 The general's on fell beasts use their 10" movement and nimble to full advantage. 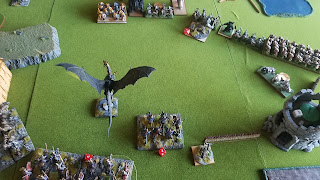 This isn't going to end well for Boo Boo the giant. 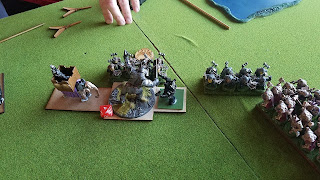 Boo boo died but this set up a charge by a regiment of knights on Golloch's gun- which I wounded but didn't finish off- as Josh pointed out I should have rear charged Goloch with my nearby general who was flapping round doing sweet f all. I tactical mistake which woudn't be my last. 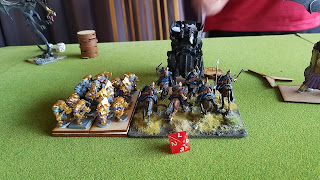 The end is nigh. The knight horde finally unleashed and destroyed the Ironguard (64 dice in the flank equals a lot of dead dwarves) and then Goloch's Gun. 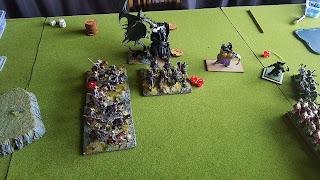 Alas I didn't capture any of the action on the right flank where the scouts kept giving ground to the Ironguard and general on the beast.

Overall I was a much happier with how I performed and think I'm getting the hang of it, still made a few major blunders at different times but definitely improving on my understanding of the interplay of various units and feel this game was a lot more tactical sparring with me trying to remain out of charge range of the dwaves and use the extra movement ranges to my advantage. The two general's also worked well in this regard but do need to ensure that I get the synergies right.

Winning the roll to pick sides helped too as I denied Gordon a very handy wood the rangers would have loved.

I am also pleased to say I killed 2 units of rangers and a number of other units. Rangers are still my public enemy #1.

At the end of the game it was a bit of a stalemate. We both controlled one sector and depending on the order we chose to resolve things it was either going to be a win to Gordon or a win to me. We decided to resolve it by rolling to see who got to decide first. I lost the roll off and so Gordon won. Good close game though and really quite tactical in the last couple of turns trying to dominate table sectors.

Holding back my charge still turn 3-4 onwards/ I tried to keep my knight units intact, use the superior charge range to their advantage and minimise shooting. A bit like the fabled norman cavalry charges it is imortant to time when t release the knights and think I timed it pretty well- sending Boo Boo as a diversion worked well too as he definitely helped clear the way.

Horde of knights- flank attack with 64 dice are pretty damn unstoppable and at the end the rolled up a regiment of irongurard and Golloch’s gun. Getting them into the charge is obviously the key and the opponent doing all they can to prevent it, the threat of the charge being enough to change the tempo of the game.

Using speed to redeploy- I dd with is a unit of knights and on my right flank used a troop of mounted scouts act as skrisihers, retreating and giving ground to the advancing dwarves.

The only things I weren’t sure of were:

Ogres- poor deployment didn’t help but they held a quarter but really didn’t use them well! Still not sure of they are a better option of replace them with mounted sergeants and a single wizard for another lighting bolt option.  My rationale for taking them was a solid unit of infantry as a potetnial can pener vs pike heavy armies whch could trip up my k-nikkets.

Mounted scouts- still not sure of using as 3x troops or if 2x regiments would be more effective. The type of unit would change their role somewhat- I need them to shoot chaff units off the board if possible and the small units while great at protecting my heavier Cav. It is whether I use them as troops to screen/cover the advance or heavier regiments as mobile archery platforms/ supporting chargers.

A few things ot ponder but Cheers Gordon, a it really was a fun, tactical game.