Orcs for Kings of war

I've been chipping away at a new army for Kings of War, based on using the Frostgrave Gnolls as the bulk of my infantry. As usual I've an eclectic range of figures co-opted into the army- Frostgrave, Northstar, GW and Mantic.

The characters at the front are some of the character figures from the new Oathnmark orc range and are lovely, very Middle Earth inspired, orcs IMO. 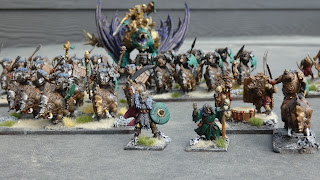 LoTR Orc scouts are being used as Ax infantry and the Frostgrave Gnolls behind are Morax- berserker orcs. 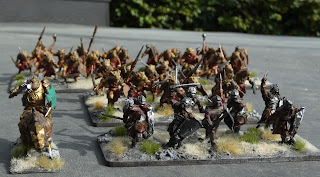 The Mantic Winged Slasher moel in the background is a lovely model too and makes a great centrepiece for the army, while the Mantic Gore Riders provide a fast, hard hitting cavalry contingent. 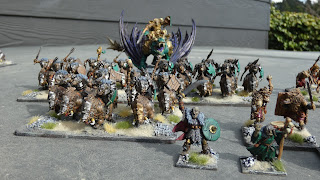 And finally, a shot of the first of the thre regiments of Morax I've painted up. I really love the Frostgrrave Gnolls and with all plasctis are ripe for conversions. For this army I've been adding weapons and arms from the Mantic Goblins as well as the Oathmark Goblins and Orcs to make the army even more varied. 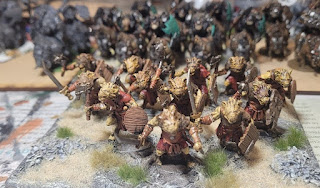 I've not had much success with them so far but reckon 5 games over two days at No Surrender in Christchurch later in the month will be a good opportunity to get to grips with the army.

Gordon asked me how I base my figures. I use a pretty basic system these days and tend to stick to two versions of it-  field green or dry straw static grass depending on the army I'm working on.

Here is the start of my latest project some "Orcs" fr kings of War using Oathmark Gnolls rather than orcs. I paint the figures then place them on the base to  figure out how I want them to look- in this case I wanted an orcish "battle wedge" formation.

Once the figures are superglued  to the base I cover the base witha product caled permafilla from the local Mitre 10 DIY store. The orcish wardrums I based today and this is not my usual method in that they are based before painting but with only two figures and a drum I figured what the hell.
Once the permafilla is dry I use PVA or superglue to add some stones borrowed from the local beach to add a bit more texture.

A few of the basics- permafilla and test pot paints.

I then undercoast the base black and dry a "heavy" drybrush of a dark brown shade.

then the stones are drybrushed a light grey colour.

Finally I use a yellowy/tan light drybrush to pick out the details of the base this step is done quite lightly.

Next up is the static grass which covers approx 25-30% of the base. I like not having a uniform cover of static grass as the contrasts draw the eye to the base and the figures don't get "lost" in the base.

Then I add green tufts for even more variety.

And finally, some late autumn tufts.

A contrast between the finished base and the one at the end of the dark brown drybrush stage.

And the bases ready for gaming.

Southcon 2022- first run for the elves

For the first time in many years I am heading down to Southcon and will be joining Josh and Gordon to play Kings of War. I’ve had lots of practice games with my Ogres and had planned on taking them but after a single game with my elves changed my mind so am taking an army I have very little experience using- a total of one game under my belt so the list is far from fine tuned.

The elves are considered an elite army and somewhat of a scalpel force and nowhere near as resilient as my ogres are so it will be interesting to see how they go.

1x Elven King,  Mount on a Horse, shardblade (melee 2+)
2x Lords on Drakon 1 with the Boomstick

Elite medium infantry with CS 1, reasonable defence (Def 4). I was tooing and froing between taking them as a horde and the seaguard as regiments or vice versa. In the end I stuck with my original idea of having the palace guard regiments flanking the Seaguard and trying to manoeuvre into flanks. I see these two units also as working together when possible. 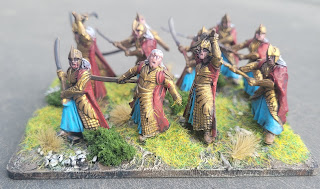 The plan is to have hem holding the centre, plinking away with 25 shots hitting on 5+. Spears with Phalanx, hitting on 4s with elite is unit is a solid, versatile unit. I hope to blunt attacks and then counter attack with the Seaguard. The now have steady aim with their shooting too. I’m not expecting their shooting to do much but hope to aim at Def 3 or 4 units as much as possible. 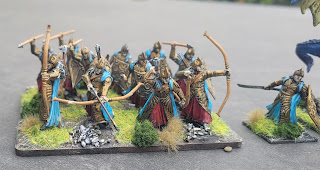 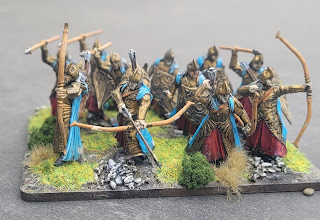 I’ve used the GW Galadheim Elves as for these units and very happy with how they have turned out.

Elite elven heavy cav. They have been boosted n Clash of Kings 2021 with the Quicksilver Lancers option for one regiment which makes them nimble and increases their nerve to 15/17. This makes them a real threat on the flans with their options to turn on a dime. I’d have loved to add Jesse’s boots to them but alas not enough points. I am using Galadhiem Knights and also Riders of Rohan to make up this unit. 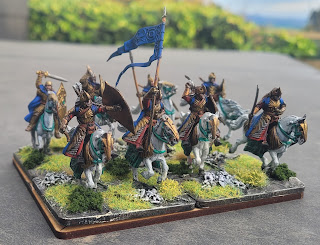 I like using light Cav type units and the Silverbreeze are some of the bs tin the game. No thunderous- unless charging off a hill memo to self for during the games!), speed 10,  melee and ranged 4+ which isn’t too shabby, nimble and elite and steady aim. For this unit I am using GW riders of Rohan.

I love the look of this regiment, using the new Mantic mini’s. These guys fly and have CS 1 and TC 1 + elite. 18 attacks, hitting on 3s. A real threat and I will need to combine with my other cav units when possible. A dangerous unit and so one that opponents will focus on. 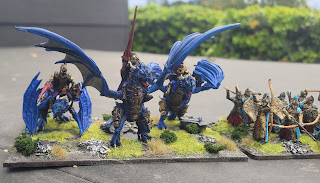 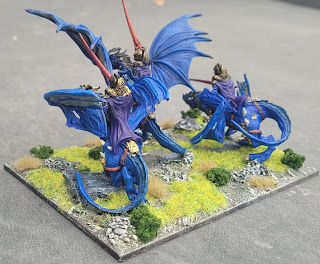 Speed 9, 5 attacks, CS 1, with the shard blade (hits on 2+). My mobile anti-flyer and anti character unit. I didn’t have points for the sabre tooth a cat (duelling). A mobile, inspiring support unit.

In my practice game I only had one but have dropped my other unit for a second one. Again I am using the new Mantic Drakon models which are stunning. I have one the Boomstick for 3 lightning bolts but am kicking myself for not taking the blade of the beast slayer. My reasoning was the broomstick turns him into a mini dragon with a breath attack option so we will see if it works out. Again highly mobile with elite melee, fly, inspiring, nimble and TC 1. Not as tough as Gordon’s human kings of winged beasts but are also cheaper. Hitting form the flanks or rear will give them 10 or 15 attacks so I need to make sure I position them correctly.

Again pretty simple- lighting bolts and one with the inspiring talisman to inspiring trools. I intend to use them as speedbumps/chaff if necessary but their main role witl be for close fire support with lightning bolts with the sea guards.

So there we have it, 11 units, 20 unit strength. Having seen the other army lists I think it might struggle in some match ups but I am hoping to be able to work the flanks and manoeuvrability. I don’t think it will do that well but am hoping to win 2 and would happy if I could win 3 games over the weekend.

A few yars ago I picked up some GW Galadhrim warriors off Ebay and they came with 4 of the Galadheim knights. I painted the infantry up a about 18 months ago as the start of a small elven contingent for Dragon Rampant but moved on to other things. I've decided to use them for Kings of War now instead.

These figures are my favourite elven sculpts on the market- I'm not a fan of some of the stylistic choices Peter Jackson made in the movies but do like the way he portrayed elven weapons and armour.

The 4x Galdhrim knights have been painted up and based as a troop of Windborne Cavalry for Kings of War but have made them on two smaller bases to use on Dragon Rampant and other skirmish type games too.

These are probably my favourite LoTR cavalry sculpts and I am keen to get a couple more boxes of them to use as heavier cavalry- Stormwind or Silverbreeze as required. 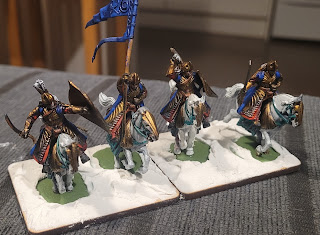 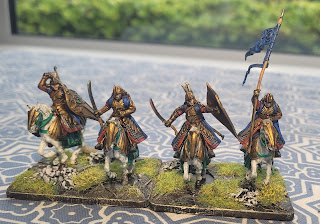 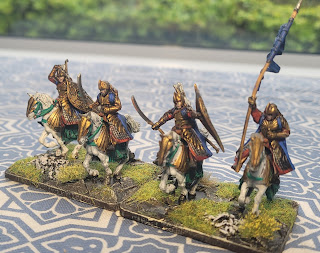 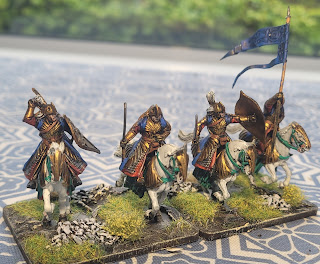 And the first unit of elven warriors- basing to be finished. I've based them up to  use as Seaguard for Kings of War.  I've enough figures to make a second regiment of these but they can be combined to make a horde if necessary.
I've ordered another box or two of these guys to also be abe to add a horde of Palace Guard and also some archer and spearmen units. 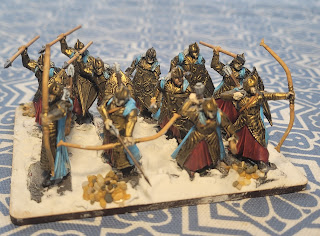 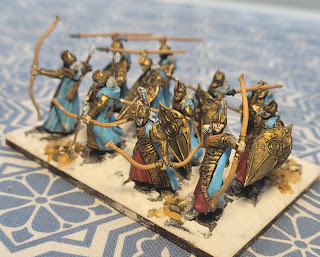 Next up will be some Drakon Riders- a horde and a couple of drakon riding heroes.
Craig
Posted by Craig C at 10:22 AM 1 comment:

I am enjoying getting to grips with the ogre army for Kings of War but have had a small project sitting in the background for some time and when motivated whch is not very often I'm afraid to say these days, I've been chipping away at it.

My aim it to create a small Slyvan kin force. I faced the Sylvan kin a few weeks back in a game against Gordon and was pretty impressed with them so that has inpsired me to get some work done on this little project.

The figures are mainly GW. I've made one regiment using the rangers and two regiments from wood (?) elves that I've had lying around for years.

The tree herder/wiltfather is from the D&D Nolzur's line (Treant).

I've a horde of Mantic Forest Shamblers as well. 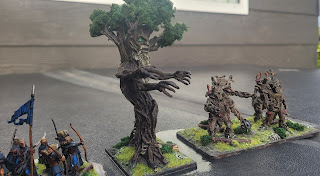 And today I am rebasing some Footsore Goths, which are great sculpts, and will be used as the Stormwind Cavalry.

I will use some Riders of Rohan as the Windborne cavalry troop.

And finally, Silver Breeze Cavalry. Again using the very versatile GW Riders of Rohan. I've come to detest the horses in this particular range but the riders are nice and this range of figures has been press ganged into wide range of armies over the years.

So all I need is to finish the basing once the permafill I use for texture is dry. I'll add a few of my D&D figures as the characters- wizards and various heroes- and we are good to go.
Craig
Posted by Craig C at 11:56 AM No comments:

I've been budy with real life etc but have done the odd bit of gaming related stuff.

One thing that I ahve recntly done is a bit of work on my siegebreakers.

These are the main change. I painted these GW metal minotaurs up in 1999 and they have hardly been used since but ahve added them to my ogre army as a third horde of siegebreakers. they are painted using different colours and techniques and don't fit exactly with my other sigebreakers but don't want to repaint them... 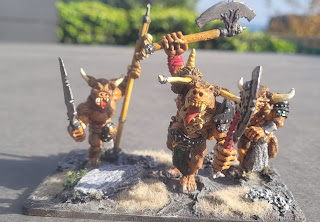 So I have drybrsuehd lighter brown tones on my plastic siegebreakers so they are a bit lighter in colour, not quite the same but closer than they did look a few days ago. 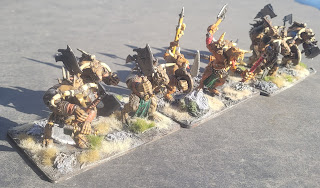 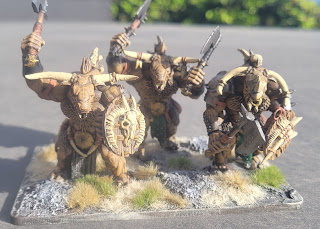 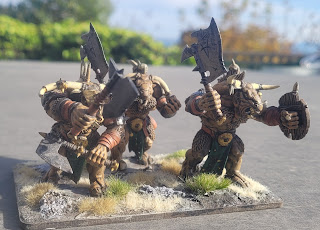 The lastest reports are:

Last Saturday I took my ogres for a spin, back to back games. First vs Josh's goblins then a second vs Gordon's undead.

I've tried a new way of doing my gaming reports.

And Game two: Vs Gordon's undead.