It is with great sadness that I must report the passing of a good mate, Nick Garden. I first met Nick at the very first Flames of War competition in the South Island, Conquest, back in 2001 at Kendall School hall in Christchurch. IIRC Nick ran a British infantry list with 2x Churchill platoons. FoW had only recently come out and the five rounds had the 2 published missions: Free for All and Hold the Line alternating all weekend- ah good times! 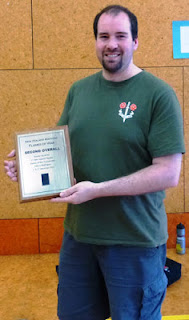 Nick soon became a good friend and we attended many, many competitions together. Originally from Dunedin he moved up to Wellington for work but came down a couple of times a year to game (usually for my TAGCONs/Day of Days and for Southcon in Dunedin). He took part in all the TAGCONs and Day of Days I ran and always had a place for me to stay when I headed up to Wellington for gaming.

Nick was a top bloke and I had many enjoyable weekends playing FoW and hanging out with him. Here is an example of one of our many, many tussles at the tabletop.

Nick was a wealth of knowledge, a formidable opponent on the table (making it to Number 1 in NZ with Flames and was usually very, very high up in the rankings), and was a hell of a nice guy. I had many, many enjoyable evenings hanging out with him and Poochie before, during and after competitions. We'd sit around discussing the highs and lows of our day, analysing tactics, talking military history, having a laugh and generally just chilling. In fact when it came to planning our themed Day of Days events Nick was, along with Poochie, a driving force in the informal organising committee, which was for all intents and purposes the three of us brainstorming ideas. We'd sit round saying "hey this would be a cool theme...", "what about...") and getting things up and running and as the events got closer  a flurry of emails would be exchanged as we honed the ideas/ rules. The events wouldn't have been so successful and so much fun without his guidance, input and participation.

Nick was also a talented painter and also ran a blog, Lintman's Wargaming blog (which lapsed in recent years). In the past few years he took part in an increasingly varied range of gaming, such as joining in the large 28mm events put on.

Nick's passing is far too soon for someone so young, he will definitely be missed 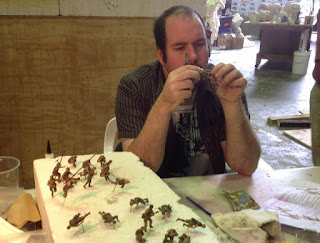 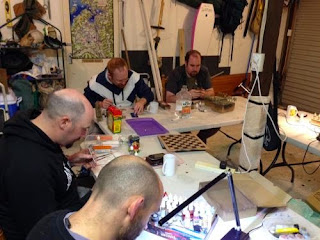 Labels: Farewell to a mate