A bit of work in progress. A wee bit more chipping away at my undead army over the past day or so.

I got some GW Mogul Knights (I think that is what they are) several years ago as part of a swap. They have been siting there unloved waiting for a suitable project ever since and I decided they will be fine for the heavy cavalry in my undead army so painted them up yesterday and will base them during the week ahead. 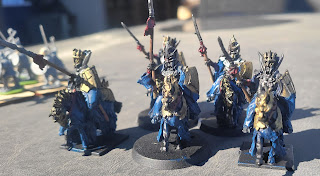 There was also a Nazgul figure who will make a great Necromancer or Liche king to lead the army. 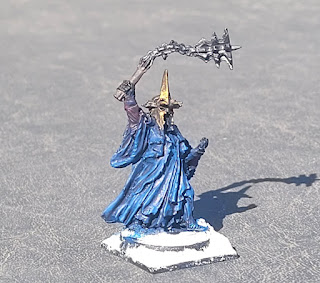 The inspiration to continue the project was the arrival of the figures I'd got backing the Ragnarok kickstarter by Colin Patten. Lovely figures for undead and I highly receommnd them. They will make a great Dark Ages/ Middle Earth themed Revenant infantry for Kings of War. The Ragnarok figures are white metal and I intend to use them in the front rank of my regiments, bulking out the rest of the regiments with plastics.
In this case I have used a mix of Victrix Vikings and Gripping Beast Saxons, using bits and pieces from a varity or ranges including some old GW skeleton heads, Oathmark Skeletons, Fireforge Undead Cavalry and Mantic undead to make the figures suitably undeadish. Once painted up I think they'll look pretty good.

First up will be a horde of Revenant infantry which will be multibased in regiments so they can be used either as regiments or hordes.