Kings of War- Kingdoms of Men show down

Tonight Nigel, Dale, Dave and I got together for a game of Kins of war at Nigel’s. As usual Daleinski acted as Nigel’s hands while Dave and I shared command of my Easterlings.

I’ve been playing round with the list a wee but and am actually working on an Ogre army so had a brainwave- add a horde of ogres to my Easterlings.

Nigel too had tweaked his list from the competition and took approximately:

A couple of wizards

Nigel’s army was pretty static but had lots of shooting options, some interesting character choices and plenty of slid infantry with the spear phalanx horde and succubi so I wasn’t sure how the game would go. We decided to play invade.

Niel won the dice off and gave Dave and I the first turn. Dave hadn't played before but quickly picked up the game. 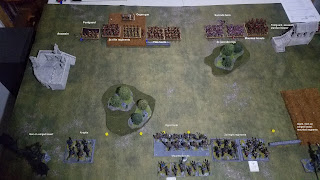 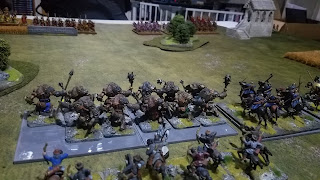 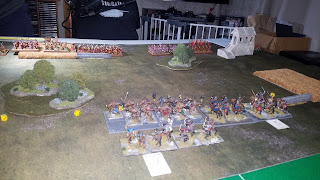 An aerial view at the end of turn 1- I redeployed my winged beast to support the centre. No shootin form me and minimal casualties from Nigel's shooting. 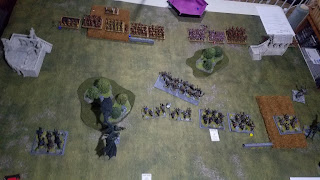 Turn 2- the ogres charge the succubi as does a unit of knights and the mlunted scouts also find themselves charged. I screen my flank with scouts while Dave uses the Giant + flying general combo on the far flank. 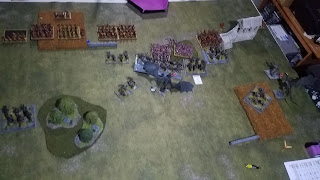 The ogres charge in while the general offers morale support/advice from nearby. 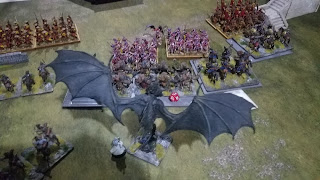 The mounted scouts are no match for the knights and crumble, leaving he succubi who had held ripe for a flank charge. 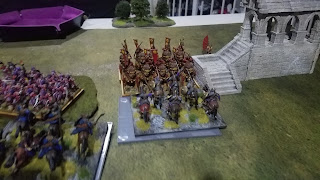 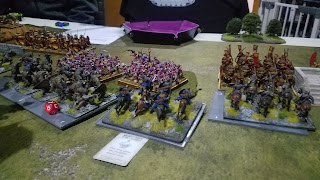 Niel's centre is crumbling and in trouble. 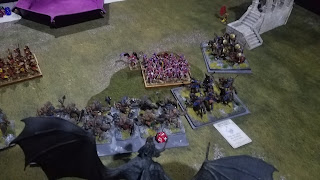 to protect the ogres I throw a unit of scouts at the pike horde to slow it down- giving Nigel his first points. 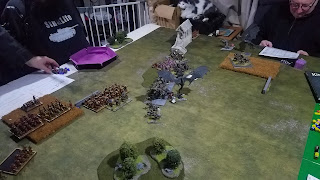 Knights on the far left flank are about to destroy the footguard, the orgres have charged the pike horde and the mounted sergeants the succubi hero. 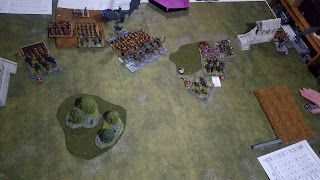 Dave destroys the succubi with a flank charge from his knights. 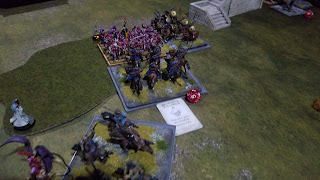 The over confident ogres are killed by the pikemen. 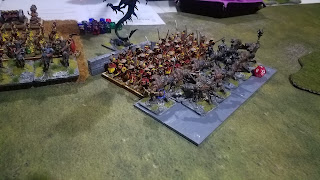 Nigel focuses artillery, missile fire and assassins at the knights and kills them. 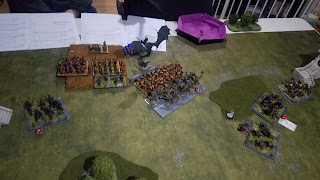 The winged eneral destroys the oran un while the knights and mounted scouts line up the pike horde. Somehow the wizard surives vs the succubi hero. 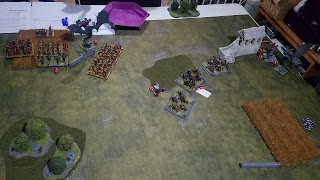 Rather than wait a trn to get all our mounted units in positoon Dave throws a unit of knihts at the pikemen and they are cut down but they keep the pikes buys and set outselves up for flank and rear charges next turn. 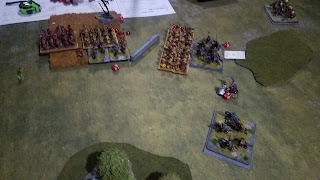 Bottom of turn 4 we had to call it but the Easterlings had pretty badly mauled Nigel's army and had them pinned in their own half. Although you can never be sure we all felt that the pike were unlikely to hold vs the combination of a rear attack by a flying general, mounted scouts from the front and knigghts from the flank, especially given their exisiting wounds. The flying general and giant combo had rolled up the right flank and so we were in the box seat and it would ahve taken a miracle to savethe situation for Nigel.
Thoughts
A few mistakes made- such as continually forgetting to use bane chant! The army hit harder than I expected but Nigel needed to screen his important units better vs the cavalry to allow for counter punches. I'd like to see a second unit of mounted scouts in Nigel's army too. I was impressed by how well the assassins did and the ogre warior horde too.
Dave thoroughly enjoyed the game and is talking about converting a crusader army to Kings. We'll try to get another game in in a few weeks.
Craig