Today was my first chance for a game since the Oamaru Onslaught a couple of weeks back. During the weekend the local players played the out of towners so today was a chance for a showdown vs Gordon's dwarves. We both ran our Onslaught lists.

I had mobility in my favour but Gordon had a list that is very well rounded and able to deal with a wide range of opponents and threats and is damn hard to beat.

I find Gordon's dwarf list extremely hard to deal with:

so lots of rock hard (Def 6) nits, ood shootin with the behemoths and rangers and solid combat units with the shildbrekaers and ironguard. I really liek the balacne Gordon has achieved with this list.

There were three objectives across the centre of the board. With my mobility I hoped to nab them and retreat away from the dwarves. I had targetted my most hated units- rangers and the behemoths as the units I wanted to try to deal with first. 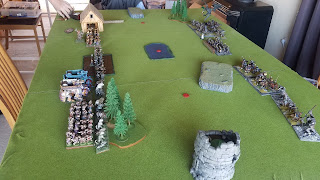 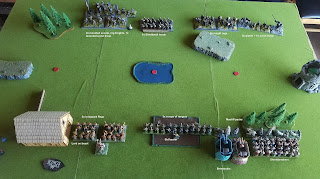 Turn 1- I got the first turn so advance across the table. 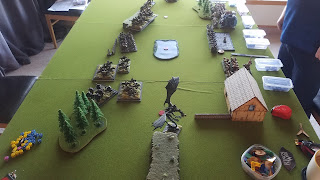 Another view of my turn 1. 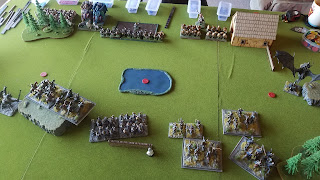 Turn 2. My picture of Gordon's turn didn't come out but he managed to kill one unit of knights with fire from his behemoths and rangers. I'd wounded the far right ranger unit (from my point of view) but didn't waver or rout it.  Gordon had given me a lesson in how to use chaff effectively and he managed to tie up giants with a 65pt mastiff unit. Grrr. Frustrated I threw my knights into the the rangers destroying one unit- but not the most effective trade to make as I wasn't able to punch through the line  after combat... 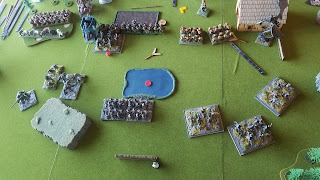 So I pulled the victorious knights back instead and the mounted scots turned to face the mastiffs and sheildbreakers. On my right flank the far right mounted scout unit has grabbed one token. 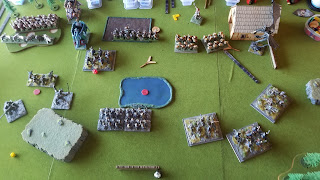 The dwarf response was swift...for dwarves. The mastiff packs tore my scouts to pieces. 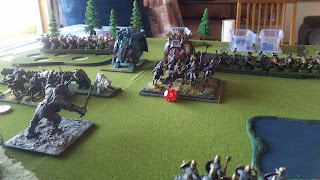 Another view- the behemoths targetted the giants while the rangers wavered my mounted scouts... who were just about to chare the rangers supported by the general on the winged beast. 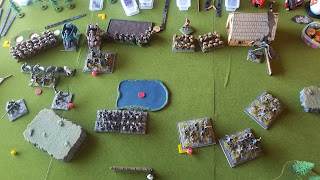 The knights didn't stand a chance vs the behemoth and the mastiffs advance after killing the scouts blocked the giant from charging the behemoth on my time. Well played Gordon! 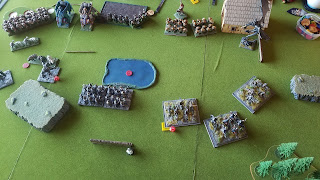 The shieldwall advance to claim a second objective. My general (in the background) has flown behind enemy lines. 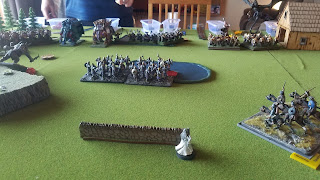 The giants are lining up the behemoths- which going into the game is the units I wanted to deal with them with- Crushing Str 4 vs Def 6. The other giant has claimed another token. 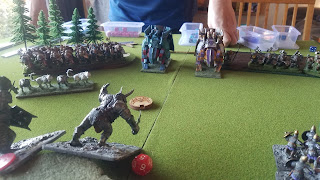 In the centre I was slowly treatin the sheildwall with the third token- which the dwarf lord wasn't impressed with so decided to take matters into his own hands. 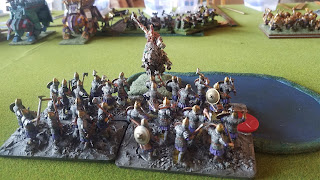 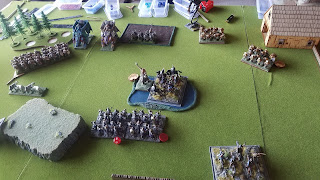 The dwarves advance and on the far left my giant (with toekn) retreats from the mastiff. the other giant finally succumbed to fire from the behemoths and rangers. 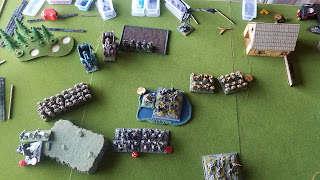 With the first giant now dealt with the dwarfs focus fire on the shieldwal unit. 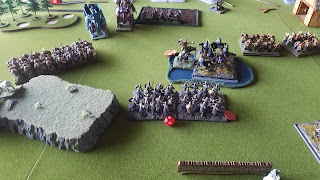 The knihts get bogged by the lord of the beast and are about to be charged in the rear as well. 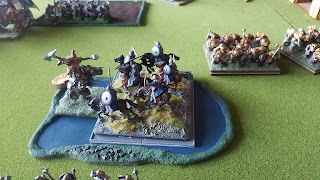 The giant cotninued to back pedal with the loot token but was cut down. 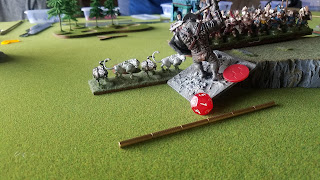 I failed to take a photo of the end of turn 6 but the shildwall and knights both died and the lord attacked the wizard- who surivived. The mastiffs had picked up a token dropped by the giant when it perished and the shldwall dropped the final toekn when they died but ordon' was unable to pick it up.
I rolled a 1 to se if there was to be a turn 7.
Result 1-1 draw.
A rather flattering draw for me as if there had been a turn 7 it was game to Gordon so I was very lucky to walk away from that with anything- I only had 2 units of mounted sergeants, a wizard and general on a winged beast left at the end of turn 6. I managed to kill all 3 units of rangers (so I claim a moral victory) and 2 units of mastiffs so was well and truely outplayed for most of the game.
My rash knight charges early on didn't help my cause but once again I was very wary of his behemoths and rangers and wanted to get in and deal with them as soon as possible. The reality is though that I was outplayed by Gordon who kept his units flanks protected and focused fire on the units he wanted to elinimate. He also ran his mastiffs to spoil my lines of attack on my planned counter attacks. As we'd discussed before the ame my lack of inspriing hurt me big time in this one and am going to look at the Inspiring talisman in future but wanted to run the same list as I'd used on the Oamaru Onslaught.
The reality is Gordon deserved the win and was damn unlucky not to walk away with it. Still not sure how to deal with the behemoths- I may be back to my preferred ignore them tactic and was far to rash with my knights early on trying to get in positon to tackle them. My plan and deployment wasn't flash and on a couple of turns really didn't have a game plan to speak of- apart from trying to always focus on the loot tokens but I need to do better at protecting the units with the tokens in future.
Still it was an enjoyable match and I really enjoyed payaing Gordon, he is a very methodical player who works hard to minimise flank and rear charges so always pick up a few tips from him during the games.
Time to make a few tweaks to the list for future games.
Craig
Posted by Craig C at 9:24 PM