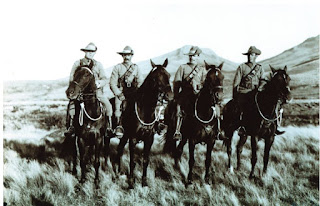 I may have mentioned I've met up with some gamers down in Oamaru. It started via an online D&D game last year run by Gavin who has moved ot Oamaru with his family from Australia. Gavin met Gordon who is keen on Kings of War. So, anyway, long story short, Gordon has got Gavin and Josh (another player from the D&D group) into Kings of War and they are busy building armies. As my last report vs Gordon showed I'm not that flash at the game but keen to be involved and roll some dice now and then.

Warhammer, KoW style fantasy games and competitive gaming in general are definitely my cup of tea but am keen to learn the rules and have a few games. Martin and Kent in CHCh also play a wee bit so I thought why not try to get them down for a weekend of Kings of War? I messengered them and they are keen so I also contacted another CHCH gamer, Mark Ottley who is quite active in KoW,  to see if he might be interested too and suddenly we had the makings of a small, informal gathering. We intend to limit it to 8 really just to see if it works and who knows maybe it might be something we could grow into an annual event. So we needed a name. The Oamaru Muster seemed to fit.

So we are planning a low key weekend of gaming in late June which will be a chance for most of us to become more familiar with the rules and also a trial to see if we can make this work and maybe become an annual event and broaden it out to more gamers- no replacement for Day of Days but a chance to run a wee gaming weekend in a far flung corner of rural NZ which just happens to be NZ's coolest wee town.

I'm happy to report that the Oamaru guys are busy painting up their forces in preperation... and i'm awaiting the arrival of a couple of Vitrix Nellies for my Easterlings (Kingdom of Men).