I’ve been messing around with army lists for Kings of War lately, trying to make my huns/ Easterlings into a viable force.

Still not 100% sold on the rules, my best description being that they are bloody! I'm still trying to figure out a few tactics and how to deal with Gordon’s dwarves which are rock hard but I’m starting to get a few ideas- many thanks to Gordon for his thoughts, insights and advice during the afternoon.

We ran the loot scenario- there were a number of tokens scatted over the board, some with victory points on them, some blank and from turn 3 onwards we were trying to control as many as possible, victory going ot the sie with the most token points at the end of the game.

Gordon ran the same dwarves as last time- and I’ve no idea what half the troop types are but something along the lines of:

General on a beast

1x wizard on a horse- with the boomstick for extra boom (I had point sos 6 lighting bolts is better than 3!)

1x general on a flying beast

The Easterlings mass. I kind of had a plan... which didn't really work.Hold the centre with my infantry, weigh my rightt flank with the knights, an elephant and the general and... hope for the best. 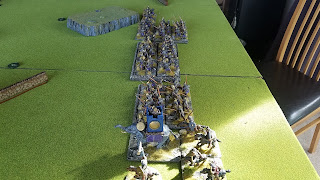 The general and my knights ready to rock. 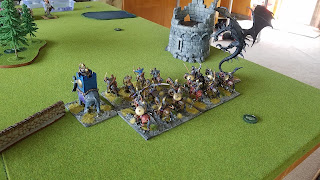 The dwarves glare at the Easterlngs cross the battlefield. 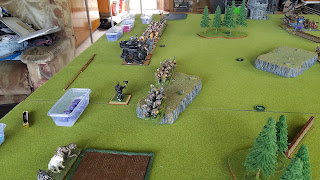 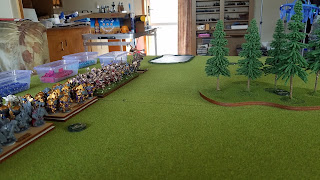 The end of deployment. the dwarves go first. 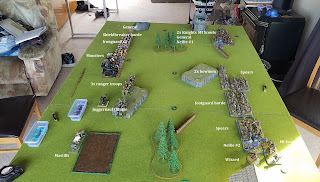 The rangers used their pathfinder to advance, just like last game 3x rangers + crossbows=  rerun of charge of the light brigade (or should that be day one of the Somme?) and the Easterling infantry got nowhere near their enemies before being shot to pieces- bloody solid unit those rangers, especially when used in 3s! I did try to snipe them with focused fire on one unit with my wizard, a unit of mounted scouts and some bowmen but didn't manage to kill any of them- a wavered result at one point being about as good as it got.... and I just pretended the juggernaut wasn't there. 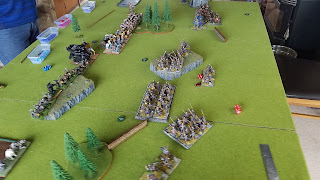 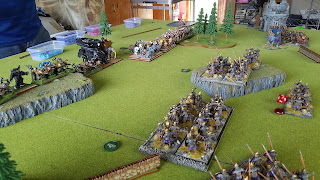 Shorty the dwarf general like so many of his kin took umbrage at the taller, more elgant, regal and well, quite commanding darthvader-eque human general aka Ninny the Nazgul and charged him on turn 2 muttering something about "there can be only one". Bring it on shorty! 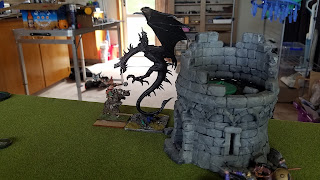 Uh oh, the rest of the Easterling cavalry watches on as Ninny takes all the dwarf lord on his oversized hamster can throw at him (2 wounds? Its just a flesh wound). 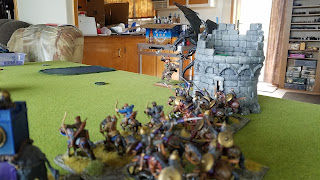 Being typical dwarves the shieldbreakers destroy the forest in their search for the objective markerrumoured to be somewher ein its midst, while Nellie looks on. 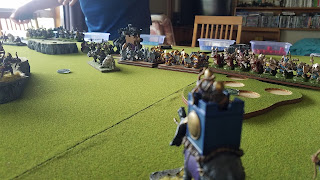 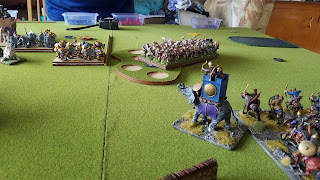 As you can see the Easterling footguard are still bravely marching into the hail of dwarven crossbows... 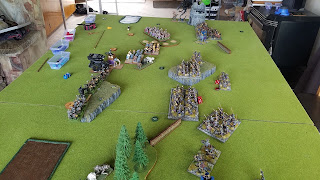 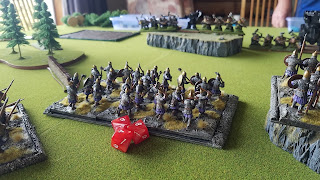 Meanwhile on my right flank, knights + Nellie  take on the shieldbreakers. 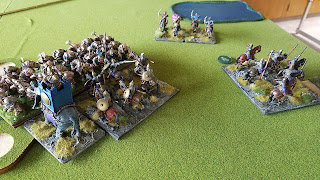 My centre isn't just crumbling, it is imploding! and we are only on turn 3. 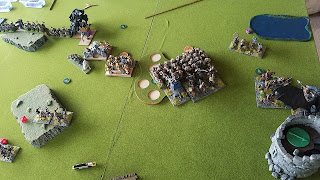 A 2 point victory token lies beneath the dwarves. 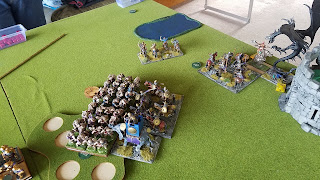 The brave dwarven genreal decides discretion is the better part of valour and knights are easier to deal with than a general. Luckily a 2 point objective marker is right here too. 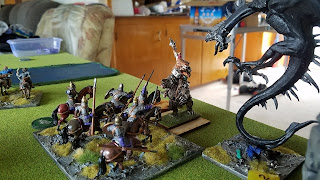 Beginning of turn 4 and where is my centre? However the light horse + wizard are having fun duking it out with the dwaren n rangers, without killing any units unfortunately but we did waver one unit. 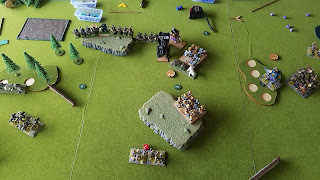 I currently control 2x 2pt victory tolkens, one with the nellie the other with the knights. I have rolled up the flank but alas the rest to my army has been shattered, not sure how I will hold this one! 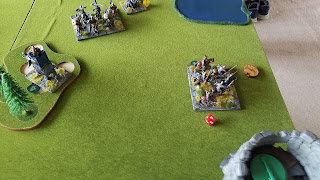 At least the dwarves are slow so my best hope is they get puffed and can't redeploy in time. 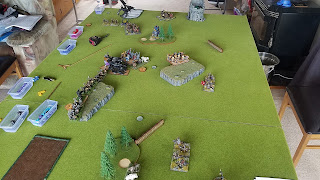 Having destroyed pretty much everything on my centre and left the dwaves turn to deal with the last few Easterling units. The elephant has crashed into a unit of Ironguard and wavered them, the dwarves fail to use their headstrong and this turned out to be pivotal as it prevented Nellie frm dying wuite so quikcly... well that was the plan she got shot to pieces by the behomoths. Poor Nellie, it was good while it lasted. 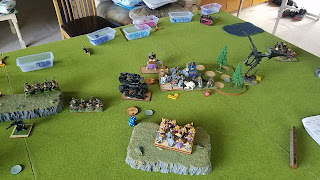 Final turn- the Easterling general destorys the Dwarven mastiffs ontesting the objective and give the rest of the dwarven army a very brave na na na na na! He holds the objecitvive, for now but ther eis no way ninny wil hld vs the angry army bearing down on him next turn. The only thing that can save him and the day is for there not to be a turn 7. 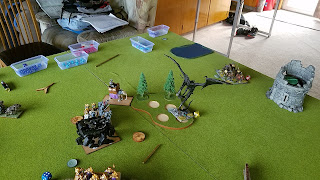 Gordon rolls low and the game ends.
Thoughts
Holy crap that was boodbath! I had about 3-4 units left, this game is a slaughterfest!  I managed to kill about 4 units of dwarves (which was 4 more than I managed last game!) and somehow held the two key objectves.
Lessons learned?
Far too many. Still not 100% sure on the rules, a bit too much of a bloodbath for me but it definitely rollicks along.
I really struggled to deal with the three units rangers- so far my infantry regiments and hordes have been destroyed by them in both games without ever rolling a single dice in anger!  They are bloody versatile and when you have 3 units  of them backed up by a jugernaut you certainly have a pretty fine firebase. They are damn nasty for my infantry to deal with, and so far I haven't really had an answer to them. My plan had been to concentrate fre vs them from my bows, a unit of mounted scouts and the wizard and it started to work- at least I wavered one unit, but couldn't finish it off.
My tactics vs the behemoths and other armour 6 units? Ignore them! Not much of a tactic really but at present my best option seeems to try to concentrate on everything else- and that isn't really working either.
I need to get better with using my infantry and quite frankly I've been pretty pants with them so far, marching them into the valley of death to be slaughtered without ever getting into hand to hand combat- not ideal at all. I want to use them more defensively and later in the game so deploying them forward directly in front of the rangers was probably not ideal and need to play round with the best way to support them. So units I've been wanting to play more defensively with have ended up having to charge across the table and died as a result. So how I am using them, or planning to use them, needs to change.
But that is the point for me really of these games, trying different combos, tactics and units to get a feel for the game, what works and what doesn't for me. I think I might try my footguard as standard guard (armour 5) rather thn go for 2 handed weapons, that might help them stick aorund a little longer.
I feel a little outgunned by the dwarves but that is part of the challenge, trying to sort out tactics that will work for me, and with my infantry units so far I really need to lift my game. That being said, Gordon has designed a very handy army, versatile and a nice combination of units that are hard to take out piecemeal and whch ack a wallop, a good combinaton of firepower and units that can go forward and take the fight to the enemy so it's fun tryng to fgure out how to counter it.
I got pretty lucky with having the two most valuable objectives right where I weighted my flank and that helped my cause in the end.
I will ponder on infantry a bit more but I have been looking into trying to make a more mobile/ hun themed version with even more cavalry, we will see.  I like the idea trying mounted scouts as regiments, 14 bowshots looks pretty good and could be handy, screening the units of knights- 14x 18" shots without penalty for moving could be a really handy firebrigade unit too so am keen to try them.
The combiantion of knights supported by Nellies (mammoths) was effective and definitely will use that combo again- they move similar speed (7" vs 8") so I think proably better than combining the nellies with infantry and again it is about working out the right combos and synergies.
Anyway enough ramblings from me.
Thanks for an enjoyable afternoon's gaming Gordon, thoroughly enjoyed the company and chance to discuss the game and different ideas for my army. Not really a victory to the Easterlings though but a good chance to get a better understanding of the rules.
Craig
Posted by Craig C at 9:54 PM