The other day my little blog, and game vs Josh last week,  got a mention in the Kings of War community update .

Well would the new found recognition go to my head or would Gordon and his sneaky dwarves bring me crashing back down to reality?

Gordon has revamped his dwarves and is now running a Brock heavy force backed up by Ironclad, and rangers of course.

I always enjoy playing Gordon, he is a very skilled and canny player and always manages to do something to catch me by surprise and always learn heaps by watching how he uses his  units- in this particular game it was a lesson in use of characters to minimise/ protect vs charges. 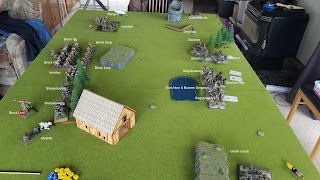 Gordon had more troops to deploy than I did so my goal with deployment was to keep my main force closely supporting each other and use the goblin scouts out wide on each flank to hoepfully force Gordon to deploy wider than he'd like. 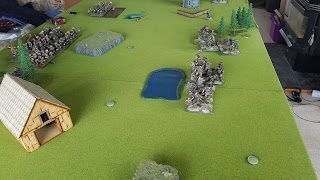 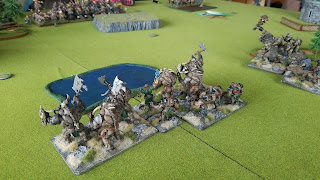 That is a crap load of brocks! 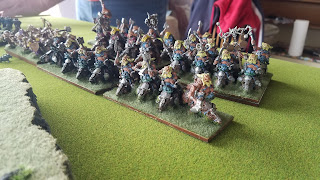 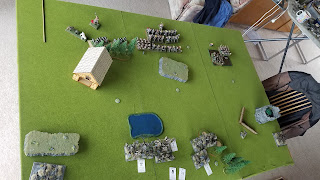 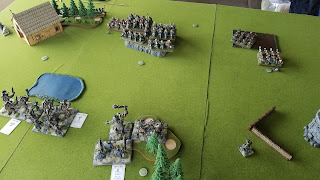 I deployed the shooters in the woods for extra protection but Gordon targeted them with his rangers and sharpshooters and managed 7 wounds then rolled and 11 for nerve test and destroyed them! I'd deployed my sergeant further than 6" away to try to get a bead on the brock troops. First blood to Gordon. I'd already lost a unit I was expecting to be able to slow down the brocks with without even firing a shot. 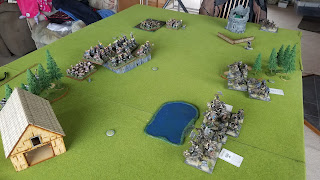 The brocks claim the hill- a handy positon to charge down from. 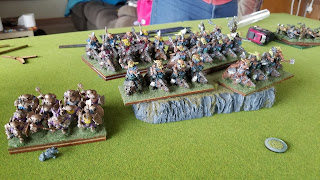 On my turn I used the building to screen my goblins from the sharpshooters, opening myself to a flank charge from the mastiffs and brock lord but was worth the risk. Nom Nom, the boomer sergeant and boomers advance into the pond.
I got lucky iwth Nom Nom, three lightening bolt hits on the sharpshooters in the woods, rolled a 10 for my nerve check followed by an 11. Both sides shooting was on fire. Alas I did forget to shoot the sergeant at the Brock riders, which was my main aim going into the game!
At the top of the table I decided to scoot the oblin socuts up the flank to tie up the rangers and Ironclad for a couple of turns- option B was to do a 90 degee pivot and reinforce the centre which may have been the smarter move as it turns out. 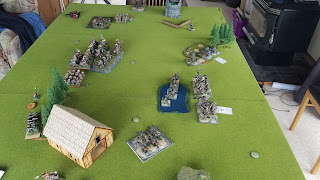 Turn 2: Sure enough the brock lord takes up the challenge- causing 9 wounds and wavering but not destroying the goblin scouts. 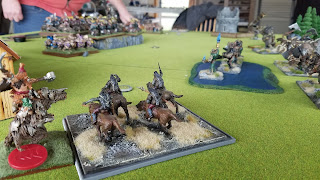 The brocks lining up their targets... 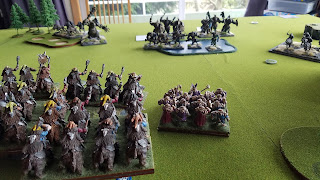 Turn 2. I wasn't expecting Gordon to be so bold with his brocks, he threw a troop of them and a lord into the boomers and boomer sergeant but luckily for me only caused a few wounds. The second brock troop charged the giant and again did a bit of damage. I had stuffed up the hunters deployment and on my turn had pivoted them to swing round to where the shooters had been so they were not in a charge arc to support the giant- a mistake that Gordon capitalised on. 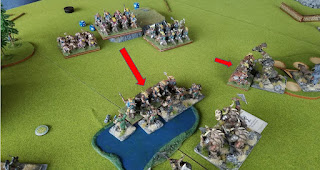 My goblin scouts retreated and afterwards Gordon pointed out that nimble units can also turn in a retreat- a handy rule to know for future reference. The siege breakers did a hindered charge on the brocklord and did 5 or 6 wounds in him but were now open to a charge in their flank by the brocks. 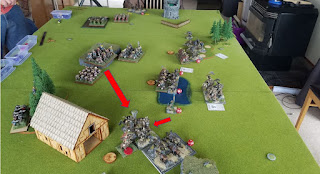 Things got complicated on turn 3. The bserker lord (big bully that he was) did a corkscrew charge vs the goblin scouts and the mastiffs and brock riders double teamed the siege breakers- something I'd overlooked  on my turn.
Nom Nom had healed 5 wounds on the scouts but they weren't going to survive another flank charge. Things were not looking good for the Ogres. in the pond the dwarf lord and brock troop continued trading blows with the boomers and boomer sergeant. 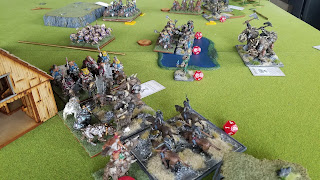 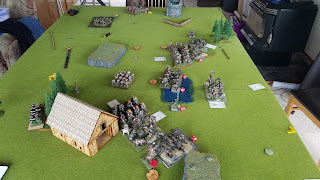 A top down view of the key battles on Gordon's turn 4. 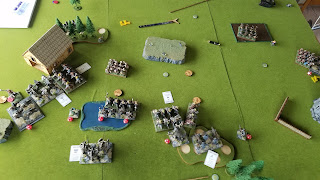 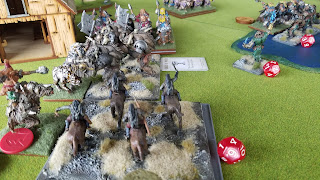 Botom of turn 4. Not a complete white wash but I have lost the siegebreakers, goblin scouts, goblins scouts at the top of the board too- okay so it's not looking good. Hoewever, the boomers managed to take out one troop of brock riders while in the woods the hunters anniliated the oteher brock rider troop- hunters are becoming my favourtie unit. Overall though this definitely is not looking good! 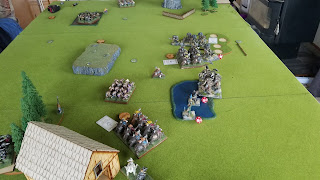 The brock regiment charges Nom Nom how despite the odds stays- doubles 1s! Gordon repositioned  the dwarflord to protect the brocks flank. 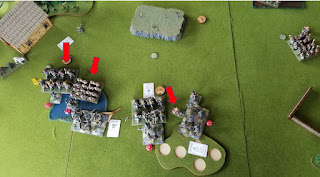 The giant finally starts rolling over 3 for number of attacks and destroys the brock regiment but he is sitting on 13 wounds and is wavered. Even with fury he's not looking good. The hunters and the sergeant take on the dwarf lord and slay him- but the lord did as asked and slowed me down for an extra turn and prevnted me charging the units I wanted to. 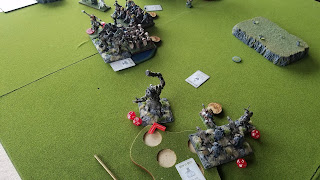 Hey were did the hunters go? Sharpshooters + rangers= no more hunters. In the last couple of turns rangers really hit home with some accurate crossbow shots. Somehow Nom Nom stands for another round vs the brocks. 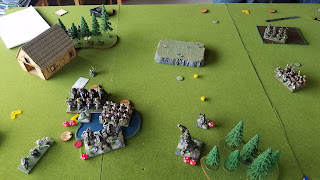 Turn 6. I wanted to charge the brock riders who were covering one objective with the  siege breakers but Gordon again made excellent use of an advance after combat to make sure that he blocked them and prevented the charge. The  sergeant who was my only other unit left on table claimed one objective. 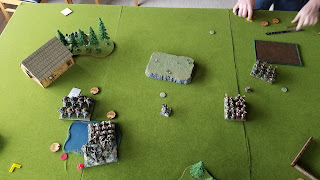 The siege breakers charge the Ironclad instead as it was their only option- they do a few wounds but not enough to count. 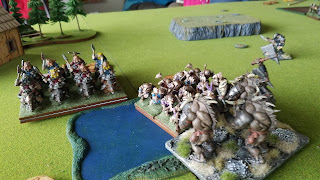 Result: 4-1 to the dwarves. Turn 5 and 6 I tried to get in position to claim another objective but it wasn't to be.

Gordon played really well and capitalised on my many mistakes and I was on the backfoot from early in the game and he never really gave me a chance to get back into it. The units I took out late in the game helped a wee bit but I was well outplayed this time.

Gordon took out my shooters on turn 1 with a good nerve test roll which didn’t help my cause (sharp shooters 36” range, yikes!) but it was my fault for deploying the sergeant too far away to inspire them!

His brock rider troop charges on turn 2 also caught me off guard and I was playing catch up, or more correctly trying to hang on for dear life, from then on and was never really able to wrestle the initiative back off him. Throughout the game Gordon did all he could to cut down flank charge opportunities and did this really, really well.

I played my goblin scouts very poorly and need to use them better, my plan to use them to try to spread his defence wide was sound I think but I should have reployed rather than trying to sneak up the flank on my riht hand side of the table. Still 1 goblin scout regiment did tie up the hunters and Ironclad for 3 turns so the sacrifice wasn't entirely in vain.

Overall though, a decisive and very well deserved win to Gordon. I was worried about the charges of those brock riders, the mastiff pack on the flank is a great wee chaff unit too that needed to be taken into account each turn and so I think was another useful element of his force.

Not sold on the two regiments of goblin scouts and may swap one for more boomers but overall depsite the loss was happy with the force,. I just need to play it a bit smarter. I always learn more from games I lose rather than ones I win so have a few lessons that were drummed home in this one.

I shall lick my wounds, take heed of the lessons and plot the demise of the dwarves in our next encounter.

Thanks very much for the game Gordon. I don't feel I put you under much pressure this time but I think that was because of the way you played it and as I said you definitely deserved the win.