Based on experiences at Day of Days, and using my gepanzerte at the World's last year, I've decided to take a serious look at my armoured panzer grenadiers. One weakness Ian and I had at the weekend was a total lack of smoke capabilities and our pak 38s struggling to keep up with our infantry- no artillery support was just silly, it really made us struggle to
make headway. Twin armoured PG forces wuold have been far more sensible.
.
That has led me to re-assess my own armoured infantry for Southcon- as a back up to the Staghound force for if I go axis- and I want to include the heavy platoon as under the new rules it will be far more useful.

I have been looking at the force I used last year and last night painted up a heavy platoon but am unhappy with it so am stripping them back completely and starting again (oven cleaner being a wonder material for this! Simply spray on oven cleaner, leave five minutes and take off with an old toothpaste, takes less than a minute, then I wash in detergent).

Anyway in 3E I am considering adding some Quad AA half tracks (at the expense of my recon) as they can now move and fire at half rate  (RoF 3/6) so and will be far more handy.

Usually I run some panzer MkIIL/Ns as support with Marders but am considering some stugs instead- the front armour of Ian's being handy last weekend, and with the Quad's i havve plenty of anti-infantry options.
As you can see there are no panzerknackers- unheard of I know!  The other option I am looking at replaces the Quad AA and adds some 8cm mortars instead.

The weekend was a succcess, I really enjoyed all the games vs great opponents. Perhaps we had slightly too large forces and 1000pt would have been better (but even more fragile). The games were close though, or at least the ones Ian and I had were.

Going  into the last roundeach round there were 3 allied and 3 allied vcicctories per round, but in the final round the Germans took a 6-0 clean sweep to hold the Gustav line.

Here are the results:

Cal and Ian B have two played since Southcon 09 which Ian won, so although rusty they were still hard to beat. It was a really close tussle between Tony & David (Wellington) vs Noel and Stephen (Invercargill) for the top axis spot but Noel & Stephen came though in the end.

Here are a few photos.

Round 1: No Retreat vs Keith (US Recon) and Adam (US Armoured Rifles)
The American Recon/ armoured Rifle combo attacked in the first no retreat. Ian and I were in toruble for turn 1. Armoured Rifles double timed and everything of ours that could fire was smoked. I only jsut managed to ambush with the 233s and took out the HMG platoon (except the commander ho used sole survivor and denied us a VP) and  did not do enough damage to the other AR platoon. From then on Ian and I were desperately staving off defeat and did all we could to keep the game alive. Somehow holding on but eventually lost- great game. Keith and Adam playeed really well and the initial advance was truely spectacular. a well deserved win the the American combo! We managed to take 2 paltoons off them and nearly had 4 so wasn't a complete washout.
10-4 loss. 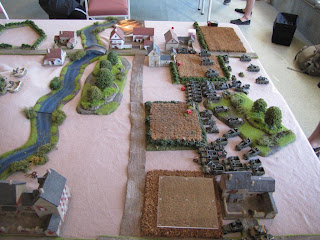 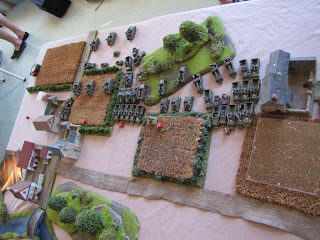 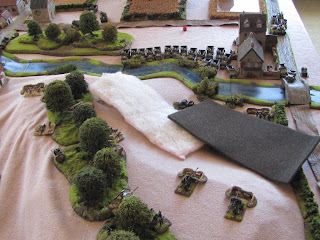 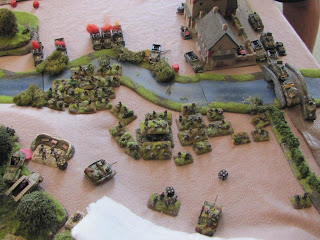 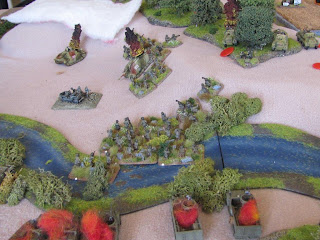 Game 2: FFA  Vs Richard (Indan rifles) & Andrew Cook (Canadian Shermans)
Andrew split his Shermand up and we massed vw 3 of them with stugs & panzers.  Managed to killl all 3 but then the company commander for 4 turns kept remounting his tank and popping off shots (we simply could not pass a fire pwoer test ot kill the bloody thing) and in the he almost stalled our attack. He took out my panzers! We only just managed to get Ian's infantry into position and they smashed two Infian platoons to just capture an objective in time- armoured assault into woods was our anwer to a total lack of smoke templates (we needed HQ mortars!) 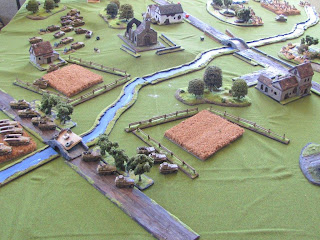 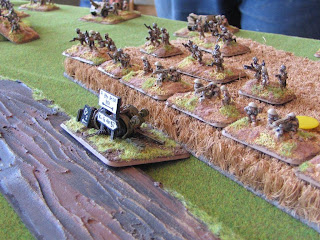 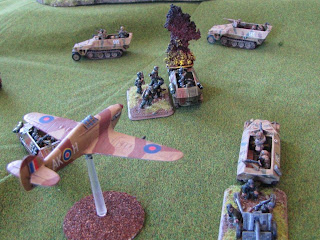 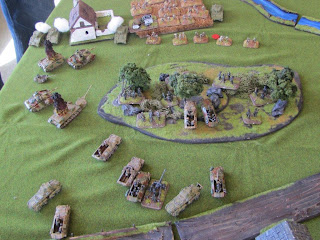 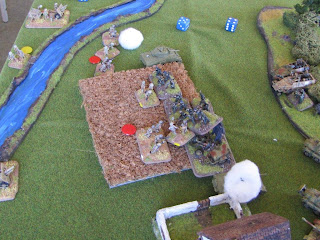 Game 3: No Retreat vs Cal (US Shermans) and Ian B  (Armoured Rifles)

Ian and I were attacking on the most open table. We tried  to screen with our recon and eventually made some progress but as it turned out we timed our run just a fraction too late and were unable to hold the objective. Another close, fun game which we nearly managed to take out but made one or two mistakes. Again a lack of artillery/smoke/ air hurt our chances and the grilles again underperformed. We did get a two platoons towards the end and threw the Americans off the near objective but them raced Shermans in to contest. 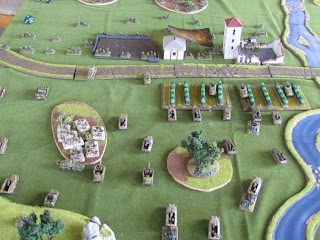 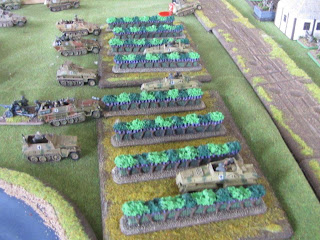 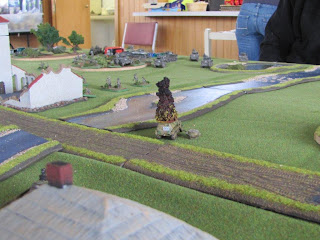 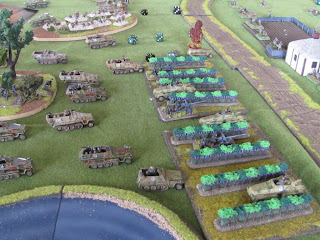 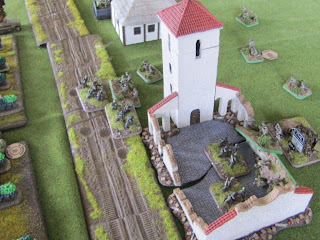 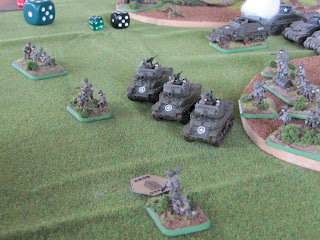 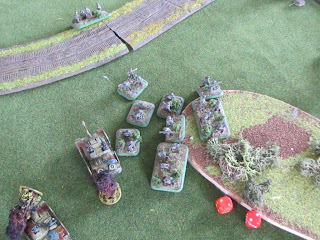 Game 4:  Fighting Withdrawal vs Nick (Kiwi Lorried infantry) and Chris (Kiwi Shermans)
Playe on my Cassino table, I and aI lsot the dice off and defended. We stuck our pak 38s and an armoured PG platoon in ambush and prepared to weather the storm. The game started well and we were under lots of pressure but then the dice started rolling badly for Chris and nick and at last the grille boombardments shone. About turn 5 was a critical one where some gone to ground infantry of mine supported by two tansk held off a determined British attack. I think Chris and Nick's luck is best summed up in a turn were Ian rolled 7 defensive fire dice needing 5s and pinned.  Had that attack succeeded we would have all but been thrown off the central objective. It was still a tense game and when playing Chris and Nick you know they are likley to come up with some sort of trick the swing things in their favour- and the priest 50 cal/ assualt guns almost did that. I don't think Nick or Chris would rate it as their best game ever simply from the point of view of the dice turning so compleely against them in the middle turns. We managed ot hold the centre but in the end it was the bad rolling that on it for us.
Result: 10-4 to us. 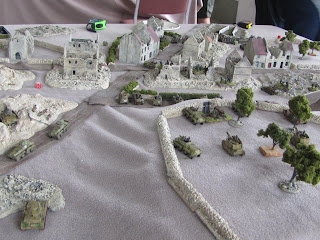 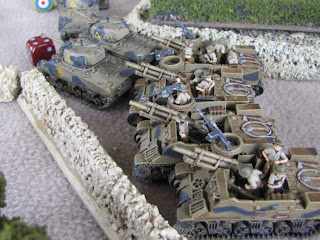 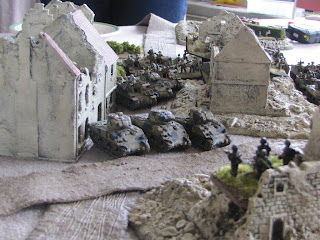 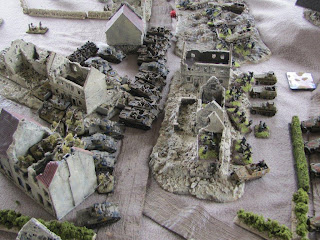 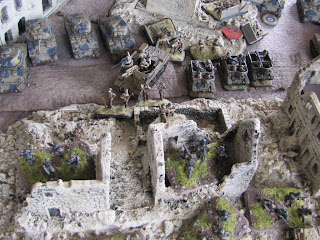 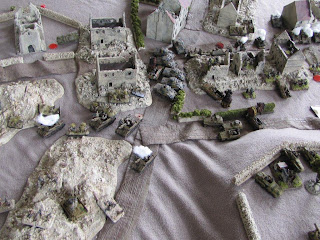 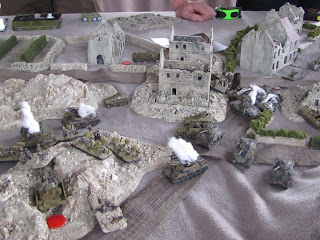 Comments
A really enjoyable weekend. Doubles is a lot of fun and a more relaxed that a  standard singles comp- or at least that's my impression. Great games vs a great bunch of players some I'd not played before, some I'd not played in a long, long time. Ian and my list was pretty terrible and showed a definite lack of cohesiveness- too many key gaps, especially smoke & artillery capabilites. Recon was fun but not terrible useful in most of the games. The 233s were fun and only lost them when Andrew C finally decided to takke them on. Ian laucehd a few really good assualts, and armoured assaults but some dedicated artillery would have helped us no end when it came to preping attacks.

Next year I'd like to run a Gazala- Alamein theme, proably doubles again but with less points. I think our first ever doubles (DoD 2008) was 1000 pts per player and it is probably a good total for this style of game.

Thanks to all the players for turning up, I hope you enjoyed your weekend.

The first kiiw rifle platoon, based to match my FJ for Cassino themed games and the Italian campiagn in general. Once finished these guys will by my Mid War (late- i.e. late 43) force. 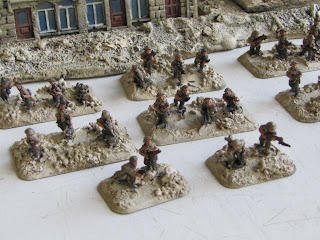 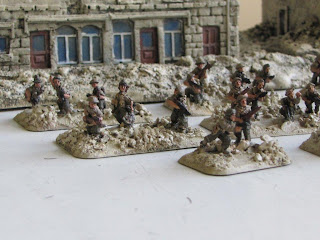 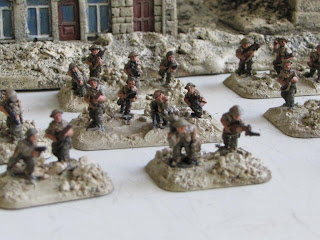 With the new MG rate of fire while pinned in V3 I'm actually tempted (for the first time ever!) to run them as a Lorried rifle company. Here is my first idea:

It has all the main bases covered- a bit light on infantry but lorried rifle companies usually are. The 17 prs are there as I couldn't find enough points for two sections of 6 pdrs- unless I dropped a PIAT but the platoons are already pretty small.