My 251/9 arrived this week so it has been pressed into service for tonights game and I've made a few tweaks to the force:


We decided to keep it simple and play max attrition. I went into this one thinking I had a well balanced force and would do well. 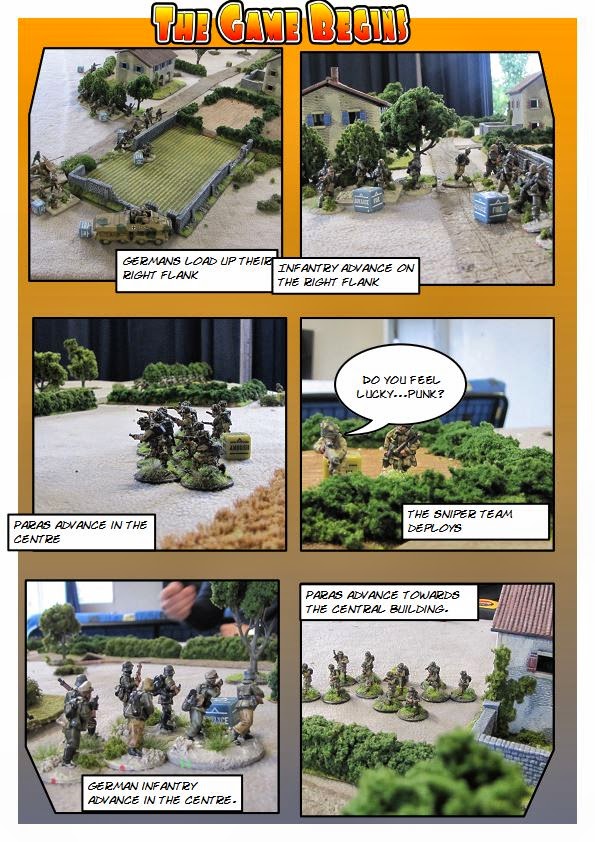 Things started well, on turn 1 I only lost a mortar man. Then on turn 2 my panzershrek team missed the sherman but then the 37mm put 2 pins on the veteran tank, and my 233 added another. Alas then panzershrek team was destroyed by small arms fire from US paras. The 57mm AT gun missed the flak 38 and the American mortar failed to range in on flak 38. 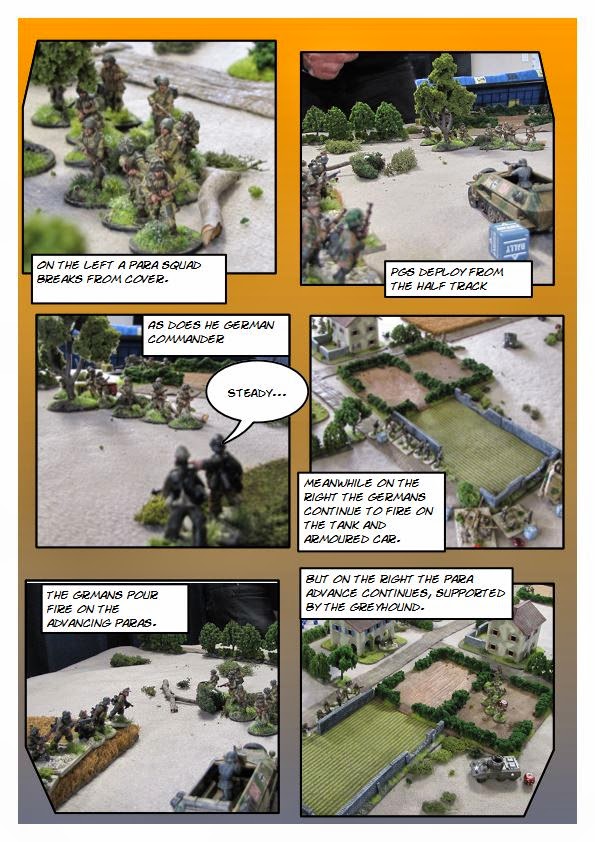 Turn 3 the 57mm missed 251/9, as did the bazooka team. However the paras kill 3 men form the squad that had debussed from the 251/1 and my platoon commander was shot throught the heart by a sniper. As a bonus the panzer greaniers that had leapt out of the 251 managed to kill 6 paras!

Bazooka misses. On turn 4 (below) the Vet germans attack the 2 remaining paras and completely miss, they take a loss and are routed! 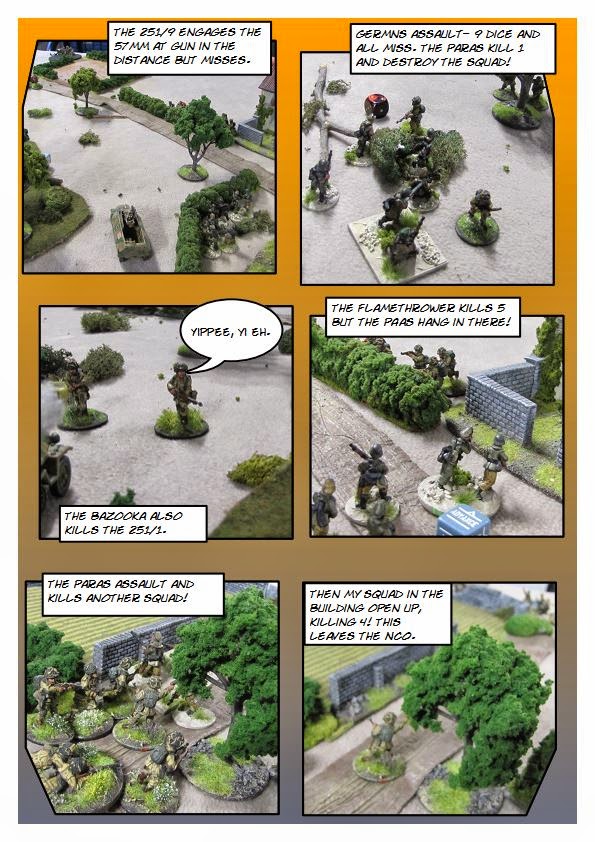 On turn 4 the pioneers kill 5 paras with the flamethrower but the paras (despite 4 pins) remain.  The 233 hit and pinned the greyhound and the bazooka knocked out the 251/9.

Turn 5 and my pioneers kills 2 infantry along the hedgerow, again again the mortar misses the 57mm At gun (by 1- grr). Near the stone wall the paras assult and kill 3 Germans for the loss of two, the gemans flee then the squad in the building pour LMG fire onto the Americans killing 4 of the 5 survivors- but again the Amerians refuse to break! The Greyhound hits the 233 and immobilises it. 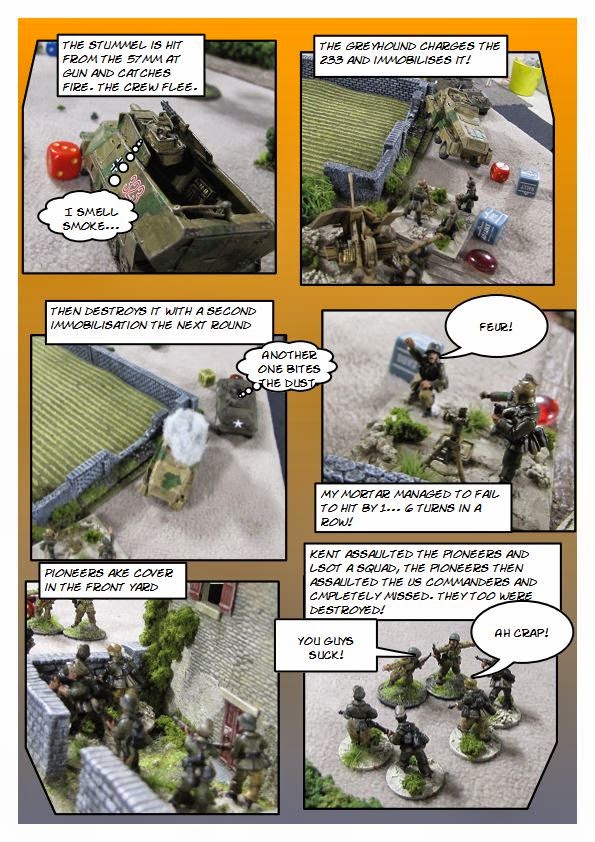 In the final couple of turns Kent completely mopped up my force, killing a total of 11 squads for the loss of 5 of his own. Talk about a thrashing.

An interesting game, the decisive moment coming when my panzer grenadiers (turn 3 or 4) failed to kill the infantry squad on the left flank and were destroyed despite the dice favouring them 9-3. We both felt I was about to roll up the flank at the point as both tough fighter units were about had it but somehow Kent managed to keep all his damaged units on table despite needing some very low morale rolls which meant that once again I was not able to finish off badly damaged squads and the last couple of turns were completely one sided with how the dice fell but by then the damage had been done. Overall though I thought my force had a good balance and was happy with the way it played, even though it simply melted away in the end.

we do need to look at a morale system for the game, once a force has taken half or more casualties a morale test each turn to stay fighting, maybe with a penalty for extra squads destroyed, rather than fighting to the bitter end.

A few reinforcements from Artizan Designs have arrived to complete my German Army in Italy. I've mainly used the Artizan DAK range for the army as they have trousers, puttees and ankle boots so are suitable for troops in Italy as well as in the desert. The figures in  shorts have been converted with some greenstuff. I've just painted them to get them on table for this week's game but need to add some highlights when I get a chance- but they will do to game with.

The LMG teams and the riflemen- all from the Artizan DAK range. . 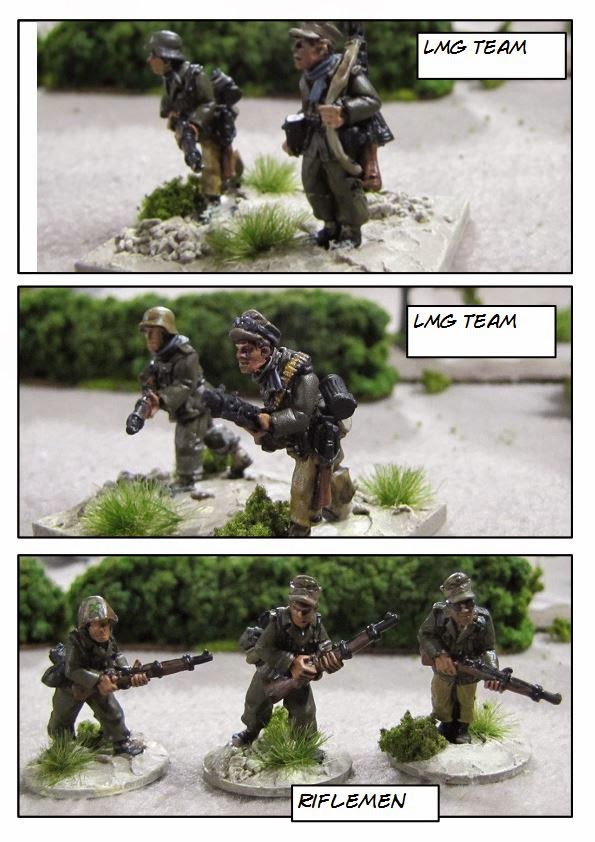 The Panzershrek is from the Artizan's late war range and the kneeling rifleman is a Crusader Miniatures figure. 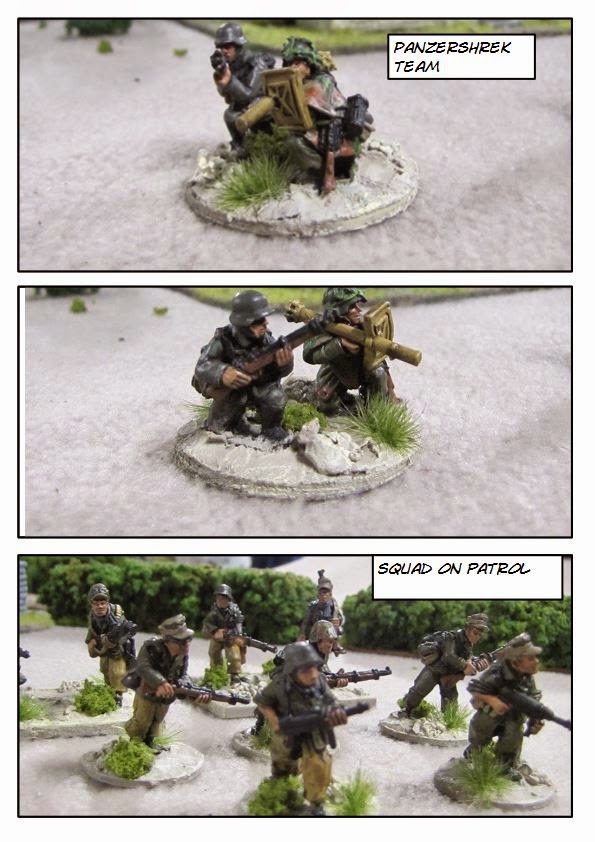 The greenstuff trousers are probably a bit baggy, but they'll do. Two of the men will be used with the infantry squad, another three are going to be used with my pioneer squad, and the last will be used as my NCO in the command squad. 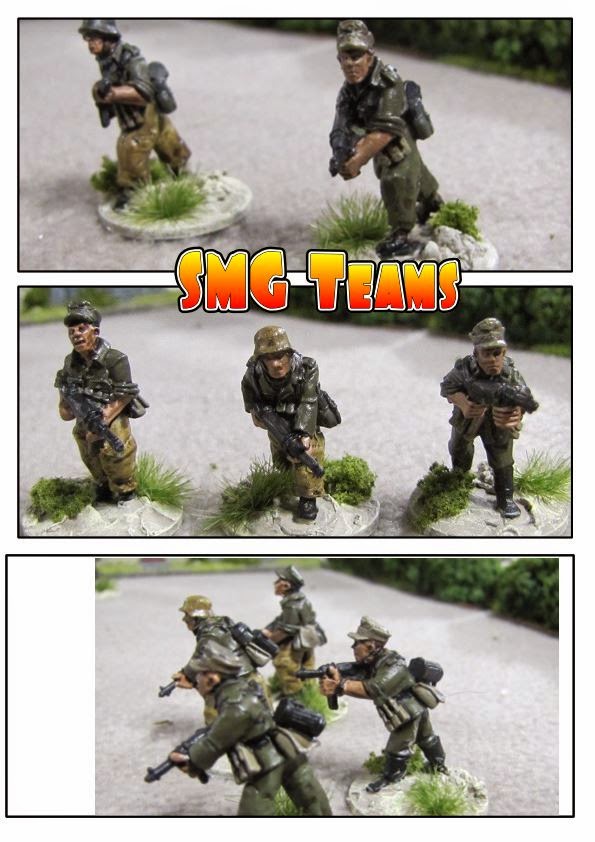 We'll see how they go in this weeks game.