A Howl from the North

Once again I’ve been a  bit slack at updating my blog this year but I’ve been busy the last few weeks so not been doing too much gaming related stuff. I’ve just spent a couple of weeks on holiday, visiting my younger brother in Gisborne and have also settled on a new house which I take possession of this coming Friday, so am in the middle of organising to move as well as sorting out all the stuff associated with the sale.

When time has allowed I’ve been slowly chipping away at various projects but not doing as much as I’d like. I’ve been rebasing quite a few figures as I’ve been working on my Fall of the West Goths and Hun forces- still more infantry required and need to get myself some Late Romans to add to this army.

This weekend I’ve been down at my bach and have taken the opportunity to rebase some more of my Rohan cavalry for Middle Earth games (using my new larger bases) as well as rebased my bugbears and organised them into a force suitable for either Kings of War or Dragon Rampant.

The bugbears are all Reaper Bones which originally were used in our D&D games but one of my many projects has been to turn them into an army for Kings of War or Dragon Rampant. The idea is that they will represent a force that has emerged out of the northern wilderness to wreak havoc on the civilised lands.

A Howl from the North

I’ve a few Reaper Bones Giants to add to this force too.I have also some Frostgrave Gnolls that I need to paint up and will become lesser infantry and scouts of the army.

I think I’ll give them a crack using Dragon Rampant once I have moved. 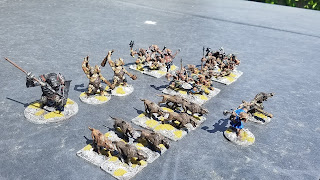 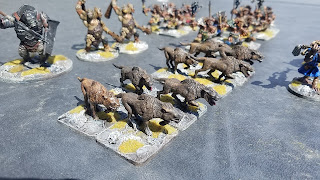 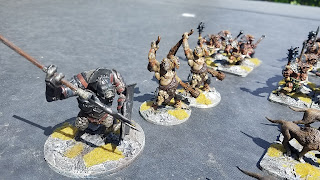 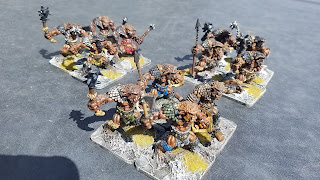 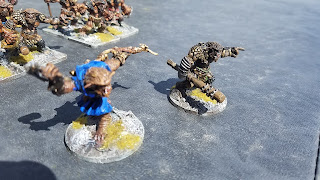 The shaman is a Reaper Gnoll with a Reaper Bugbear head-swap. 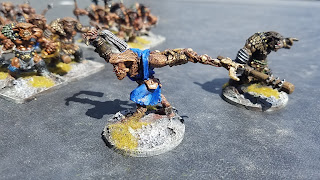 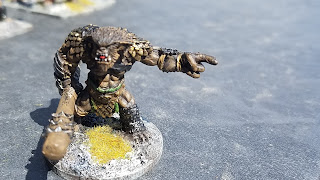 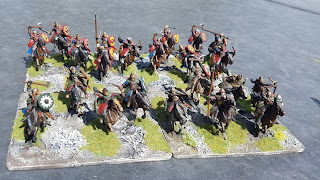 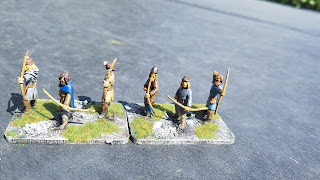 I have also been doing some slightly different bases. I’ve got Joe at Titan Terrain to make me square or rectangular bases with rounded edges (look similar to FoW bases) and am really happy how they have turned out.

My next job is to get Joe to make some sabots so I can multibase the wargs or Bugbears to make larger units in Kings of War- 4 bugbears in an irregular formation will make a horde using the Ogres army list or 4 wargs will make a regiment.